The mother of a teenager who died after being attacked in Auckland's CBD earlier this year has asked people to be kind and look out for one another. 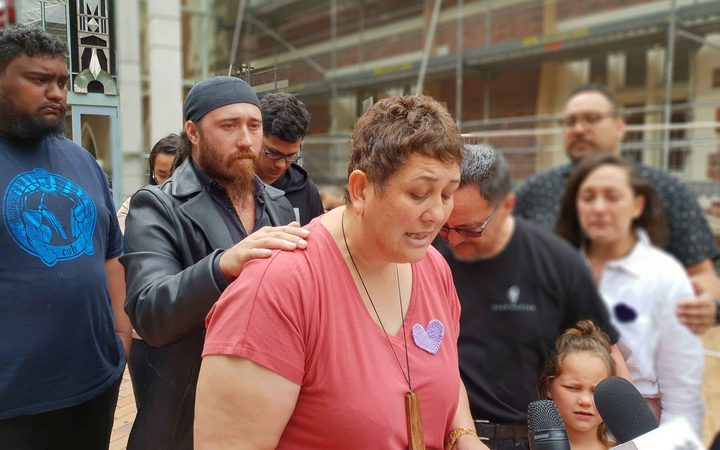 Kirsten Holtz asked people to be kind to one another outside court today. Photo: RNZ / Anneke Smith

Her son, 18-year-old Eli Holtz, died after he was assaulted at the intersection of Wellesley Street and Queen Street in the early hours of 27 January.

This morning his mother Kirsten Holtz fronted the media after her son's killer, Myron Felise, pleaded guilty to a charge of manslaughter.

"This has brought an end to 10 months of anguish, grief and frustration for our family. It's now time for our family to reset our direction for the future.

"There are no winners in this tragedy. We've lost our son Eli and the Felise family have lost their son for a season as well and our hearts go out to them."

She made an emotional plea to the public to care for one another.

"Nothing can bring our Eli back to us, but we now want to move forward in a positive and confident manner. We ask you to be kind to each other and to look out for each other."

Mr Holtz was visiting Auckland from Whangarei when he crossed paths with Myron Felise.

The teenager was being driven around by a friend in a Toyota Starlet on 27 January when they pulled into Wellesley Street in Auckland's CBD around 3.15am.

Felise and his associates were standing outside Father Ted's bar, where they had been drinking since 1am.

The car Mr Holtz was a passenger in switched lanes to move closer to the group, before the teenager fired a single water pellet from a toy gun at Felise.

Crown prosecutor Emma Smith said this pellet hit the 30-year-old in the lower back.

"This angered but did not injure Mr Felise," she said.

CCTV footage captured a friend trying to hold Felise back as he moved towards the car that had come to a stop at the lights.

"Upon reaching the passenger side of the Toyota, Mr Felise opened the door and punched Mr Holtz in the face. He then reached inside the vehicle, picked up the water pellet gun and used it to strike Mr Holtz at his body, breaking it on him," the prosecutor said.

Ms Smith said Felise knocked Mr Holtz unconscious and continued punching him as he sat strapped into the passenger seat until a friend pulled him away from the scene.

The teenager was taken to hospital with untreatable brain injuries and put on life support before he died the following day.

Felise, who had name suppression up until his plea, was due to go on trial next week.

He was 22-years-old when he and five other men were charged with the murder of Manurewa liquor store owner Navtej Singh, who was shot dead in 2008.

He was found not guilty of murder or manslaughter, but convicted of aggravated robbery.

Felise's whanau and relatives of Mr Holtz packed the public gallery to standing capacity this morning.

After the hearing members from both sides embraced one another in the High Court's sunlit atrium.

Felise will be sentenced on 28 February next year.