Homeowners in one of Auckland's newest development will be charged at least $1000 a year for 30 years to pay for the roads, pipes and streetlights. 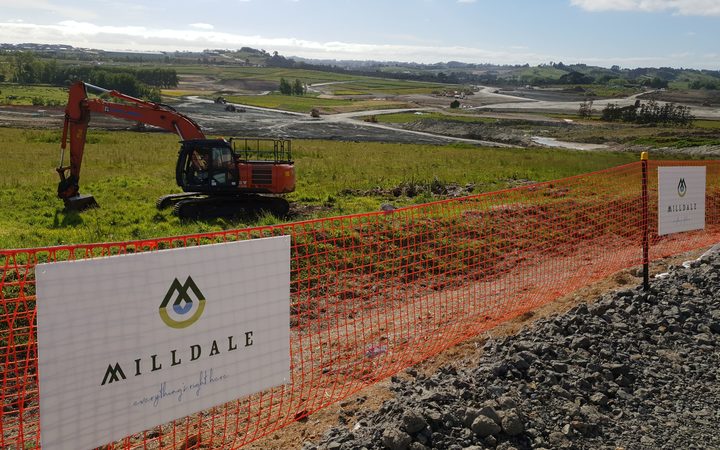 The site of the 9000-home Milldale development near Orewa. Photo: RNZ / Rowan Quinn

The government and Auckland Council are chipping in $91 million for infrastructure for the new housing development - but the eventual homeowners will have to pay it back.

Mr Goff said despite that extra cost, the scheme will help with home affordability because the biggest barrier to affordability was a lack of supply.

More than half the money would come from the ACC fund as an investment, with the rest coming from the council, the government and the developer, Fulton Hogan.

The development will be largely funded by a partnership between Auckland Council, Crown Infrastructure Partners and Fulton Hogan Land Development.

In a statement, Mr Twyford said the partnership is an example of the innovative new approaches to financing infrastructure.

"This funding model can be used in other high growth areas affected by the housing crisis to help more houses to be built more quickly," he said.

"This could include private investment in infrastructure funded by a charge on the properties that benefit from the infrastructure."

Mr Goff, in the statement, said this will allow homes to be built much faster than they would have otherwise. He said the housing crisis will also be tackled quicker.

"We've zoned much more land for housing, but we need the infrastructure before we can build on it," Mr Goff said.

"Using Crown Infrastructure Partners to fund that infrastructure enables us to build roads, water and wastewater services without overburdening Council with debt and exceeding our debt to revenue ratio, he said.

Construction has already started on the properties.