About 200 homes in Auckland are still without power after winds battered the city on Thursday night. 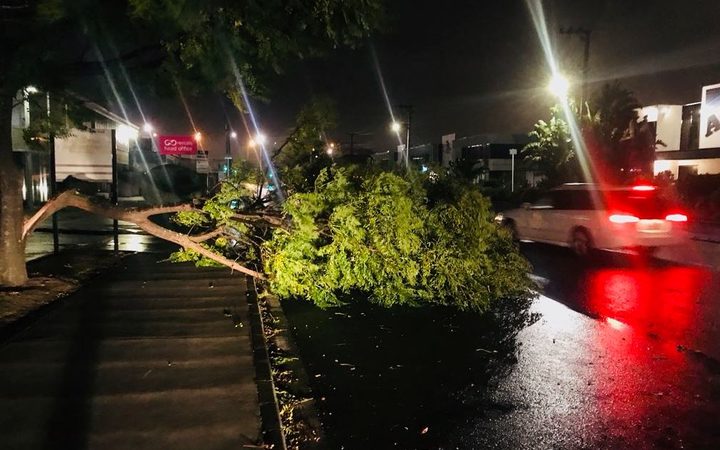 Trees were blown away back in April during severe weather in Penrose. (File photo.) Photo: RNZ/Laura Tupou

Strong winds eased late evening and the last callouts to Fire and Emergency were at about 10.30pm.

️ It's been a very windy afternoon in the Auckland Region. In fact, between 4-5 pm our weather station at Western Springs recorded a gust to 82.4 km/h!

This is the strongest wind gust at this location since the damaging wind event on 10 April 2018, when 94.5 km/h was recorded!

Police said fencing, timber, trees and branches had blown onto roads in Auckland.

The North-Western Motorway was also affected by debris but the Transport Agency said that has now been cleared up.

Fire and Emergency said wind had also lifted parts of roofs from houses, although nothing extremely serious.

Vector said pockets of the city from the south to the north were affected.

At its peak, around 7pm, some 2000 properties were without power, the energy company said.

Crews working through the night restored power to all but about 200 properties in five areas of the city, and these were likely to be restored during Friday morning.

He said about 40 crews were either working to repair power lines or on standby.

Mr Botha said residents should stay away from fallen lines or trees and get in contact with Vector instead.