The teenage driver of a ute which rolled and killed a 17 year old Aucklander has been sentenced to a year's home detention. 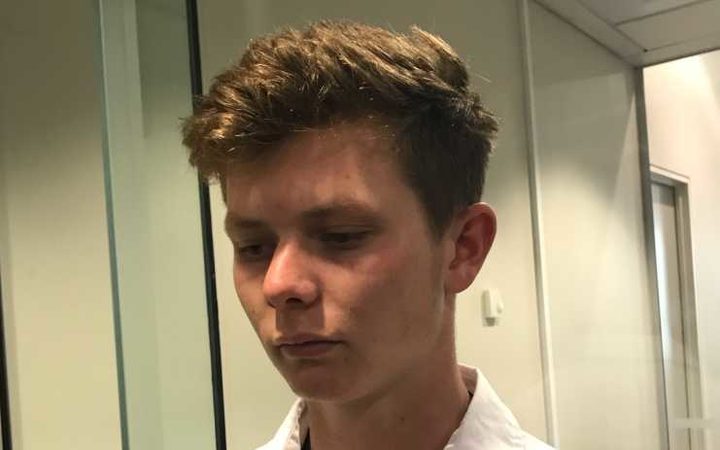 Robbie Cederwall was seriously injured after the vehicle he and seven others were in crashed doing doughnuts on the beach at Rothesay Bay in June.

The driver, 18-year-old Regan Baxter, had been drinking and initially fled the scene before returning to talk to police.

He pleaded guilty to four charges including dangerous driving causing death, failing to stop to check injury, and drink driving.

Around 50 people, including friends and family of both Baxter and Cederwall, packed the court room at the North Shore District Court this afternoon as Baxter was sentenced.

He said the year leading up his death had been the happiest in his son's life as he was a prefect at Rangitoto College in his last year of school and was looking forward to studying in Wellington.

He said he worked every Saturday at the Salvation Army store and also helped develop Christmas hampers to those in need.

"He was my best friend."

He said memories kept playing in his head of saying goodbye, seeing him in intensive care, as well as being woken up at 2am to be told his son had been in an accident.

"That moment was the worst moment of my life"

The fact that Baxter had left Robbie lying on the ground injured had left a "horrific movie playing" in his head, he said.

He said everyone had been traumatised by it, and some had even dropped out of school or were on medication to cope with it.

"The fallout from this is massive and will continue for the rest of our lives.

"The reality for me now is rather than talking to him every day I have to go the cemetery."

He said it would have been Robbie's 18th birthday in three days time.

"I won't get to see him on Christmas day or see him graduate from university. I won't be able to see him get married or have kids.

"It's very hard to carry on knowing my boy is gone."

He said drink driving and doing doughnuts on the beach was "always going to end in tears."

He addressed Baxter and told him his sentence was to now live to Robbie's standard.

"I don't want to hear that you're on drugs or been caught drink driving again."

He asked the judge to consider the most substantial sentence appropriate to help deter others.

"I know nothing can bring Robbie back, his death is permanent and irreversible. My saving grace is I will always have beautiful and meaningful memories of him."

Baxter's lawyer, Steve Cullen, said he had been dealing with traffic matters for over 30 years and sentencing was always difficult.

He said there were a number of mitigating facts including pleading guilty as early as possible and taking part in three restorative justice conferences with the families.

"He wants to do what he can to make amends.

In summing up Judge Jonathan Down said the court was in an unenviable position.

"This is one of those cases that is tragic and creates in everyone's mind involved in such a case feelings of being torn between one option and another.

"Wanting justice on the one hand and mercy on the other"

He said he accepted the mitigating factors including Baxter's age, remorse, and lack of previous record.

"The harm is enormous and you have acknowledged that in so many ways."

"It is tempting in a case such as this to simply look at you, to place all of the blame fairly and squarely on your shoulders, and to ignore the reality of what happened on that night."

However he said everyone was responsible for their actions and those on the back of the ute had wanted to be there.

"I can say what your counsel cannot say. I can say what you do not say because of your humility, your deep and enduring remorse and your willingness to accept total and full responsibility.

Judge Down said while Robbie's father was struggling with something "almost impossible to bare as a father" his mother had taken a different approach and appeared to have come to terms with things easier.

He wiped a tear from his eye as he read aloud parts of her statement in which she asked him to be lenient.

"I do not want prison life to be part of Regan's narrative," he read.

He read that she was thankful for the restorative justice meetings with Baxter and as a parent wanted to lessen any more harm.

"I saw a teenage in crisis, traumatised but remorseful."

He said no sentence he could impose would further instill a sense of responsibility or acknowledgment of what had happened.

"I am satisfied also that as Mr Cullen advocates it is extremely unlikely you would ever come back to the court having committed an offence of this type in the future."

He said a prison sentence on a young man could have "devastating impacts" and would be "cruel" in this case.

"This is an incident that will live with you for the rest of your life."

Baxter stood, head bowed as it had been for the entirety of the hearing, as Judge Down sentenced him to one year home detention, 200 hours community work and a two year driving ban.

However the lawyer Regan Baxter, Steve Cullen, read a statement from his family.

"We wish to extend our most deepest sympathy to the Cederwall family and to all the families involved in this terrible tragedy. We sincerly hope that young people in the wider community may think before they act and learn from our son's mistakes which has cost everyone involved. On that night many families were broken and there is no way to fix this. We are truly grateful for all the love and support extended to use from family, friends and our community."