There have been sightings of funnel clouds and small tornadoes in Waikato this afternoon. 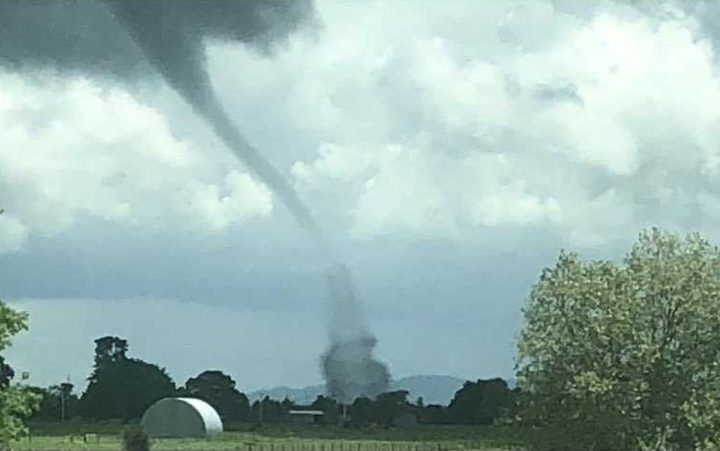 The tornado in Hamilton was spotted by Sam Owen. Photo: Sam Owen / Supplied

The MetService says current weather conditions bring a higher risk of it happening.

One reasonably sized tornado was spotted east of Hamilton just before 1pm.

Shiela Flor was on a farm at Puketaha and was putting her baby down to sleep.

The twister lifted her trampoline.

"It was flown higher than the tree behind our house."

Ms Flor said she heard and then saw the tornado coming towards her house.

"And it's like a whizzing or buzzing sound but really strong."

She said that at the time it was not really windy and the rain had already stopped.

"I am just wondering what was that noise and when I looked outside the window, yeah, I saw something like a tornado or a twister coming towards our house."

She was scared and she rushed and hid in the bathroom, she said.

"I saw some branches falling over and the trampoline flew and some toys behind our house and there are some branches outside the window, yeah, I rushed to hide the baby."

Eureka farmer Sam Owen was on his tractor when he spotted what looked like a water spout coming down from the sky.

He said he saw it pick up what looked like soil or dirt or dust.

"I then watched it for about 90 seconds and it moved really slowly, it didn't whip across the countryside or anything like that, and then just slowly dissipated and turned back into cloud basically."

Mr Owen said he was probably about 1km to 1.5km away from the twister, which he described as a safe distance.

"It was certainly sucking up some form of substance whether it was dirt, mud or branches I don't know but from my distance it was a dark discolouration in the cloud."

MetService meteorologist Cameron Coutts said a mix of rain and thunderstorms have contributed to the chances of tornadoes.

Mr Coutts said conditions were likely to remain in the region until about midnight tonight but there was still a risk of thunderstorms over Northland and Auckland tomorrow.