Jeremy Rees gives his take on tonight's Auckland vs Canterbury game, which Auckland won 40 to 33.

"You can tell your kids you were here at this glorious occasion," said the guy in the terraces at Eden Park as his mate walked out at halftime. 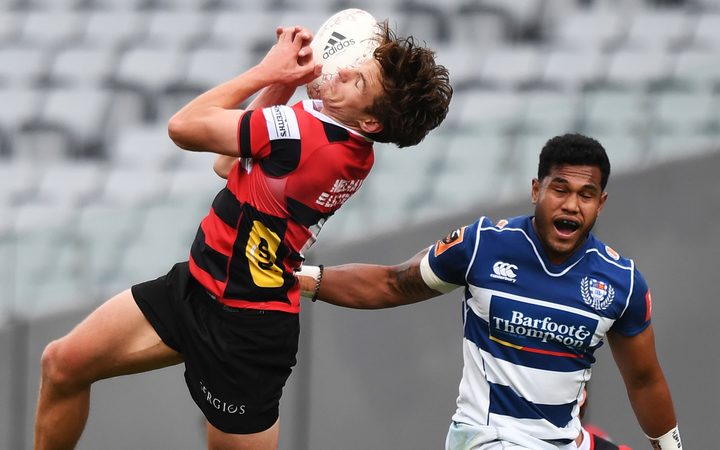 Canterbury outside back George Bridge with the ball. Photo: Photosport

At the end of the first half, it was a good joke and we all laughed. An hour later, it turned out to be true.

This match, Auckland against Canterbury, decided for the umpteenth time which province is top in rugby in New Zealand - but it turned out to be quite an occasion.

A dismal first half.

A slow growing wonder of a second.

Final nerve-wracking seconds as the match ticked towards a draw.

Then extra time, swinging first to Canterbury and then finally, decisively, to Auckland.

Auckland. The once mighty rugby powerhouse which had produced one of the greatest teams seen in world rugby.

Sean Fitzpatrick's Auckland sides of the 80s and 90s were comparable and possibly even better than the All Blacks.

Back then the Auckland crowds would change ends at half-time to watch Auckland's stars running towards them to score tries.

Then the dreary years, which turned into decades

So the final of the national rugby premiership felt like a ray of hope. The last time Auckland won was 2007, historians said. It felt like centuries.

And Eden Park turned it on. The day was beautiful.

Tickets were free and the crowds turned up in droves. They basked on the terraces in the late afternoon sun.

And Auckland were terrible. The score was 20-7 to Canterbury at one stage. The result felt inevitable. Here we go again.

People drifted away. They had paid nothing so nothing was keeping them.

Then something turned - the Canterbury side which had seemed organised, resilient, well-drilled, started to look dull. Auckland's 15 individuals seemed to prefer playing as a team.

The crowd sensed it. The knots of adults drinking in the corridors drifted back to the game. Kids stopped asking for chips and watched the game. The bloke in the Canterbury red and black jersey and a mullet stopped punching the air so often. Blokes at the back started muttering "Come on" under their breath.

And the rains came. Aucklanders understand rain. It sweeps across the isthmus every day. You could watch it sweeping in off the Waitakere ranges and onto Eden Park. And, perhaps, Aucklanders know how to play rugby in it. You go up the middle. All day. So the terraces of Eden Park will tell you.

Chants of "Auckland, Auckland' broke out, then were picked up louder and louder.

The bloke with the swan paddling pool in the terraces was jumping up and down with excitement.

The bar closed. "Can't you see I need a beer for this," shouted one punter.

The crowd was enraptured, silent, exhorting, then chanting as extra time ebbed and flowed.

"How much bloody longer," shouted one terrace dweller as the match counted through its last 20 seconds. 99.40s. 99.41s. People began fist-pumping, hugging early. Strangers having stood next to each other all game started to talk, grin.

It's a cliché that crowds "erupt" at the final whistle.

This was a slow building shout, starting twenty seconds out and peaking minutes later.

It was joy and excitement and release but mixed also with relief and, perhaps, a bit of disbelief.

It was, after all, a rather glorious occasion.