More than 150 bus drivers in Auckland and Hamilton have walked off the job today, demanding better pay. 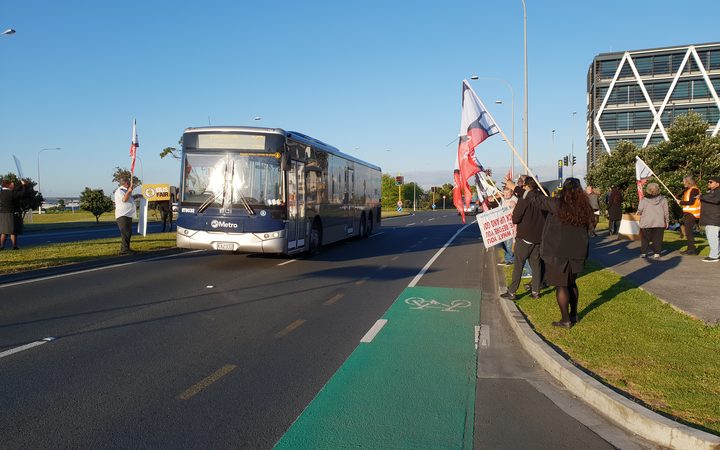 Scores of services were cancelled this morning, due to strike action by drivers from Ritchies Murphy, Pavlovich and Go Bus.

The members of First Union are striking as part of a long-running pay dispute.

In Auckland, bus services operated by Ritchies Murphy Transport and Pavlovich Coachlines have been cancelled for 24 hours until 4am tomorrow.

The strikes will affect 15 routes in west Auckland, and 10 in South Auckland, but school buses, trains and ferries are running as normal.

More than 30 drivers are at the picket line at the Manukau transport centre in South Auckland, holding flags and placards.

One of drivers striking, Kevin Clough said drivers at other companies were earning a $1.50 an hour more than those at Ritchies.

"People take their lives into our hands when we hop behind that wheel of the bus. People don't realise the hours that some of us are working. We've got a living to [earn], we've got families and things like that as well and the actual wages are quite low."

Mr Clough said they had a good turn-out for the picket and a lot of support from passing motorists.

Due to industrial action by First Union members, some services operated by Ritchies Murphy and Pavlovich Coachlines will not operate on Tuesday 23 October. School services and express services will operate as normal. Details on affected services are here: https://t.co/DCABmPsRZv pic.twitter.com/WrBbSYKN0M

In Hamilton, city buses were affected between 5am and 9am today.

Only urban routes are involved, but people are being warned other services could be disrupted, so they should check the timetables.

A separate planned strike in Wellington has been postponed.