A paddock in central Taranaki has been transformed into a massive open-air studio after Stratford sculptor Tai Meuli invited a few of his mates over. 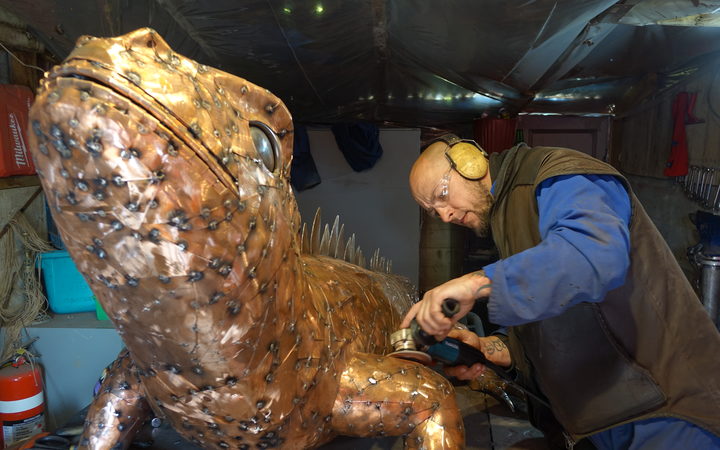 About 30 artists from around the country have been taking part in the month-long Oro Haaruru sculpture symposium, which wraps up tomorrow.

Set against the backdrop of Maunga Taranaki, the Oro Haaruru or Sound and Vibration symposium is a mixed-medium event featuring artists working in metal, stone and wood.

Event organiser Tai Meuli said he had a difficult time growing up as a Maori in Stratford and after returning 18 months ago wanted show the area some love.

"Instead of being mamae about it, hurt about it all, I thought I'll just give and love and manaakitanga and bring beautiful people down here that I've met over the last 30 years. 'Cause everyone here I know personally. All the artists right from our oldest at 76 to our youngest at 24."

Mr Meuli said the event had a number of kaupapa, one of which was "Young to Old, Old to Young" and he had wanted to create an environment where up and coming artists could work alongside established names.

The stone sculptor said it had been an exciting few weeks.

"Everyone is up early, you hear the music pumping, but none of the neighbours are complaining," he said.

"They're all coming over and they're loving the vibe.

"Everyday has been something special, something new. I get to share my skills and I also get to learn stuff. You know there's a lot of stuff I'm learning from through the blacksmithing, through the bronze, through the welding."

"Basically it started out with a roll of Number 8 wire and I made a stainless steel armature for the inside and I basically built it, modelled it out.

"What I used was a miniature little kid's toy, a little model and used that to scale up."

Mr Hull was surprised with the number of visitors making to the event site about 5km east of Midhirst. 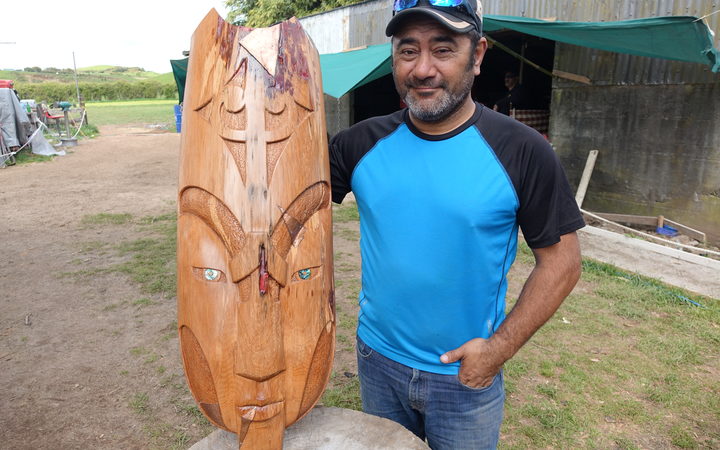 "We've had a lot of public coming out. Wives bringing their husbands and husbands bringing friends and it's just spreading.

"On Sunday I barely touched the welder until lunchtime because I was just talking and people wanted to come in and have a look, having a touch. It was awesome, yeah. I think it's a great venue."

A contribution from sales at the symposium would be made to Suicide Prevention New Zealand and the Starship Hospital and Turangi artist Nata Te Pona was exploring a mental health theme with the masks he was carving.

"This one here, which is Broken, talks about the world we live in today and all the distractions we have in our society today like cellphones and computers and all that, and we've got a Māori background which is trying to escape from his pakeha foreground because he wears two masks and is trying to identify who he is within today's world."

One of the elder statesmen on site, 65-year-old Porirua stone sculpture Davey McGhie, meanwhile, was simply enjoying the freedom of the rural setting.

"I personally enjoy it more than the urban situation. I think there's more rules i.e. dust, noise, not laughing loudly when you're having fun.

"Here you are free to create. You know it's creative endeavour 24/7 and that's it there's not really any rules. If you want to create all night you're allowed to and that's how it should be."

The Oro Haaruru symposium will finish with a silent auction on site tomorrow.