Plans for a 50,000-seat waterfront stadium in downtown Auckland that would replace Eden Park have been revealed. 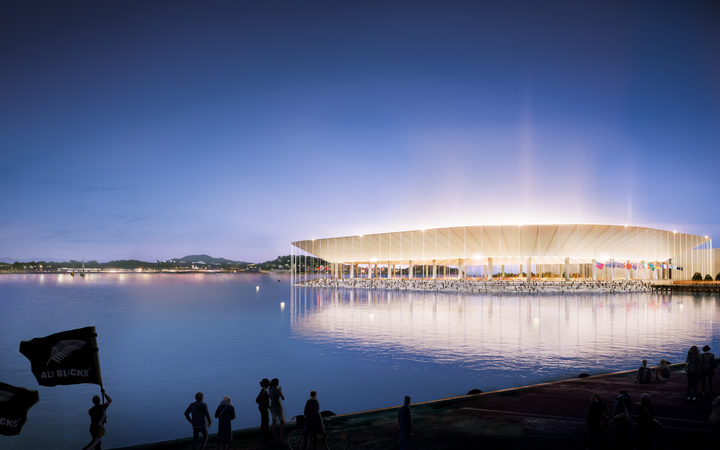 An impression of a new stadium proposed by the Waterfront Consortium. Photo: RNZ / Supplied

A group of Auckland businesses have formed the Waterfront Consortium to try to get the stadium built as the heart of a new residential and commercial development on Bledisloe Wharf.

That would mean Eden Park would be put out to pasture - or maybe infill housing.

The consortium says neither the government nor the council would need to help fund the stadium.

Chairperson Dave Wigmore said the group would seek a private developer for the project.

The developer would make their money from commercial and residential projects around the stadium - and would also acquire the rights to build on the land left by the retired Eden Park.

"Their interest is not really in the stadium itself but that's what the consortium needs to have delivered first," he said. 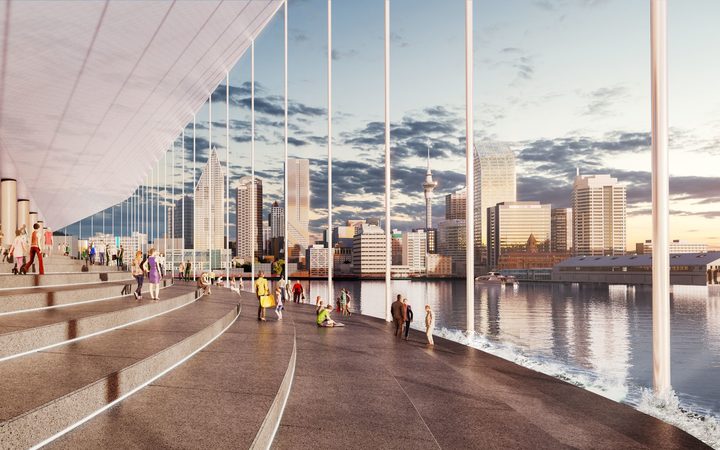 An artist's impression of the waterfront area of the proposed new Auckland stadium. Photo: Supplied

The initial vision for the stadium, released today, is a fully enclosed football facility perched on the end of the wharf, which currently holds hundreds of imported cars.

It would be able to be altered to seat 70,000 people for large events or made more intimate if needed.

Eden Park was upgraded for the 2011 Rugby World Cup but often remained at the centre of disputes, with some neighbours not keen on loud or late concerts.

Consortium deputy chairperson Mike Sage said people no longer wanted to watch rugby in the rain or miss out on concerts or sports events.

He said it would be logical for the underlying land ownership to be in iwi hands.

"We have reached out to Ngāti Whātua and provided some information to them but haven't yet been able to give them a detailed briefing."

Auckland Councillor John Watson said he was baffled by why people kept putting the boot into Eden Park.

It was iconic and historic but had a $260m upgrade before the 2011 Rugby World Cup so it was virtually new, he said.

He was sceptical about whether it could be truly privately funded.

"The real danger would be that if things it didn't pan out... then, as always, it would be the ratepayers picking up the very substantial bill," he said

A downtown stadium for Auckland has long been a fraught affair.

Twelve years ago the government wanted to largely fund one but backed out because Auckland's - then separate - councils couldn't agree on where it should be.

This year, mayor Phil Goff got into hot water with his councillors for commissioning, then initially refusing to release, a $900,000 feasibility report which failed to conclude whether it was worth it.

Mr Goff said the latest idea warranted consideration because of the promise not to use public money.

The Waterfront Consortium said the next step would be to carry out a feasibility study and to see whether Aucklanders really wanted the new build.

If it did happen, it would be at least 10 years away, he said.