A Māori language lecturer at Victoria University has complained to police after receiving a string of racist emails. 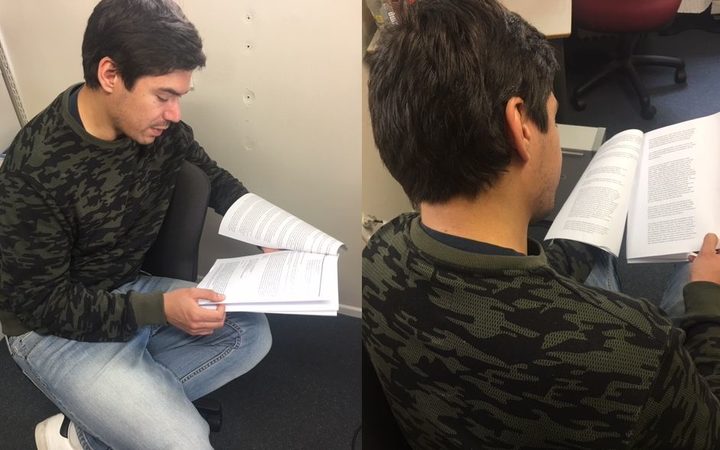 Māori language lecturer Vini Olsen-Reeder with some of the emails he has been sent. Photo: RNZ / Te Aniwa Hurihanganui

Vini Olsen-Reeder publicly threw his support behind Wellington City Council's bid to make te reo Māori more visible around the city in May.

But within days he started receiving angry emails from complete strangers.

One sender told him te reo Māori was an ugly language used by tribal, tattooed, former cannibals and not needed or wanted by anglophones.

Two emails have been sent to his account since then from multiple senders - one of whom used a fake identity.

The emails were also sent to Otago University and to colleagues of Mr Olsen-Reeder at Victoria.

One of the emails sent to Māori language lecturer Vini Olsen-Reeder. Photo: Supplied

Mr Olsen-Reeder was told by colleagues to ignore them, but after the third email he decided to call the police.

They have since opened a case file for him, where his emails will be monitored. Police will only act on them under the Harmful Digital Communications Act if they are found to pose a direct threat.

"A lot of my colleagues, as academics, we are open to critique. But people tend to think that means they get to be horrible human beings and say whatever they like and that they can be terrifically racist and mean.

"My worry is that, because this is through email, my colleagues will think there's nothing they can do. Well that's actually not true. I want everyone to know that there are avenues you can pursue so emails like this can be monitored."

Twenty-four people have been imprisoned under the Act since its inception in 2015 and others have been charged with home detention or community service.

However, Internet Safety Detective, Damian Rapira, said emails must reach a certain threshold before a criminal charge can be laid.

"There's so many variables in this particular space."

According to online safety agency, Netsafe, one in 10 adult New Zealanders receive at least one harmful digital communication each year.

Chief executive Martin Cocker said cyber bullies may think they're anonymous but they're not.

"There is in New Zealand an un-masking law. There's the ability to request that someone be identified.

"People use anonymity but they forget that they are not typically anonymous to the platform that they are sending the emails from."

But for Mr Olsen-Reeder speaking out about the emails wasn't just about catching the culprits.

He said people should know the difference between genuine disagreement and unacceptable behaviour.

"Māori are always pitched as politicising issues, so we're always the ones presented as angry and as "the fighters". But we do a lot of disagreeing because there are lots of things happening that genuinely need disagreement.

"One of the things that makes me really sad and angry is that there are other people in society who feel free to be as politically-charged and angry as they like in spaces that are actually just totally inappropriate and unreasonable."

Mr Olsen-Reeder has not replied to any of the emails, and does not intend to.