The government is considering fast-tracking work visas for foreign teachers by recognising teaching as an official skill shortage area. 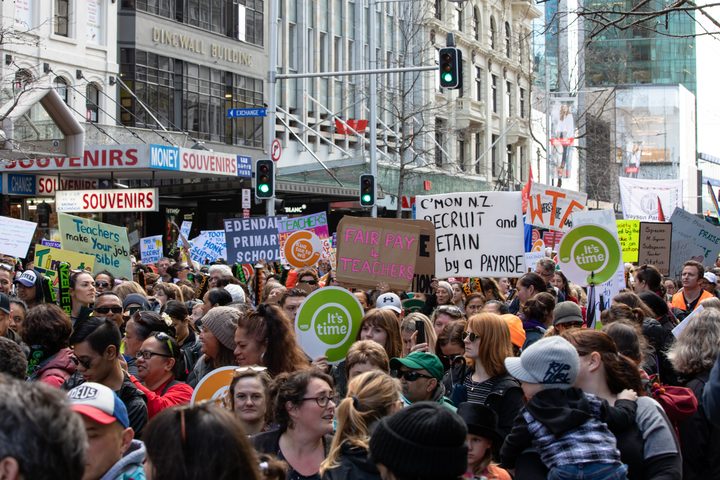 Teachers and principals march in Auckland to push for a better deal from the Ministry of Education. Photo: RNZ / Dan Cook

The Ministry of Business, Innovation and Employment said preliminary reports showed "moderate evidence" of shortages among primary, secondary and early childhood teachers and it needed strong evidence before any of the occupations could be added to its Essential Skills in Demand Lists.

Inclusion on the lists would allow schools to hire teachers without first proving to the ministry that no New Zealander was available to do the job.

The president of the Auckland Secondary Principals Association, Richard Dykes, said that would make a big difference to the city's schools.

"I can remember back several years when teachers were still on that list and the ability of principals to get quality teachers from overseas was dramatically higher," he said.

"If they just want to come for three or four years, let's get them in here. It's highly likely that once they get here they're going to stay longer."

The president of the teacher union the Educational Institute, Lynda Stuart, said the nomination showed the Education Ministry recognised the severity of the shortage.

But she said bringing teachers from overseas to fill the gaps was a short-term solution.

"I've spoken to principals recently who've talked about bringing people in from overseas into their schools and actually they don't last and they go back to where they came from because they find that its too hard," she said.

Ms Stuart said a better solution to the teacher shortage was to make changes that would make teaching a more attractive career for New Zealanders.

The general manager of immigration at the Ministry of Business, Innovation and Employment, Stephen Dunstan, said it needed strong evidence of a shortage before including an occupation on the lists.

"Because the lists provide a fast-track into jobs in New Zealand we really have to be assured that there aren't New Zealanders to do these positions or people who can be readily trained to do them," he said.

Mr Dunstan said the assessment of "moderate evidence" of a shortage was only a preliminary view, and the ministry would consult unions and employers to get a more accurate picture.

He said the earliest teachers could be included on the shortage lists was March next year.

The ministry's preliminary reports said there was "weak evidence" of demand for teachers because the number of jobs advertised in the year to June was lower than in the previous 12-month period.

There was strong evidence that few jobseekers were available to fill secondary vacancies and moderate evidence for primary and early childhood teachers.

The reports showed the Ministry of Education and Montessori Aotearoa New Zealand nominated primary and secondary school teachers for inclusion on the Essential Skills in Demand List, and the ministry was among several organisations that nominated early childhood teachers.

The Education Ministry was helping schools to hire 400 overseas teachers to work in New Zealand schools next year.

The Education Ministry said teacher supply was tight in some areas like Auckland and in some subjects like technology, maths and te reo Māori.

It said MBIE's vacancy data, which showed weak evidence of demand for teachers, differed from its own figures, which were based on advertisements in the Education Gazette and showed only small changes in vacancy numbers compared to last year.

The ministry said it had received 245 applications for overseas relocation grants, and approved 192 since February 1.

"The majority of these applications are from overseas teachers who are employed in New Zealand schools," it said.