A bus has hit three pedestrians and crashed into a shop on Auckland's North Shore. 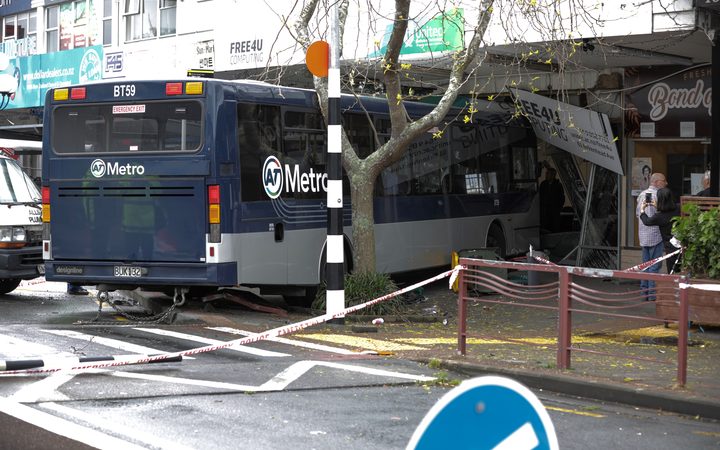 The scene of the crash. Photo: RNZ / Dan Cook

Fire and Emergency said the crash happened just before midday on Birkenhead Avenue.

St John said four people had been taken to hospital with moderate injuries.

Police said there were no reports of anyone on the bus or inside the building receiving injuries.

Inspector Kai Shao said the children's father took evasive action after realising the bus was coming towards them.

"He pushed his children away and the children were not injured. The father was struck somewhere by the bus with very minor injuries."

Mr Shao said the two chilren were taken to Starship Hospital as a precaution and the man was taken to North Shore Hospital with moderate injuries.

He said those involved were very lucky no one was seriously injured.

"It's school holidays and the weather [has made the road] wet and slippery. You just have to take extra care when you drive around," he said.

The Commercial Vehicle Safety Team is investigating the incident and the driver is being spoken to as part of the police's enquiries.

Mr Shao said there were plenty of witnesses and CCTV footage to work with.

He said the driver was traumatised and her initial recollection was that the bus "just started accelerating".

An Auckand Transport spokesperson said they would be working with the police in its investigation.

Cordons were in place on Birkenhead Ave at the intersections of Onewa Rd and Mokoia Rd, and motorists were advised to avoid the area. 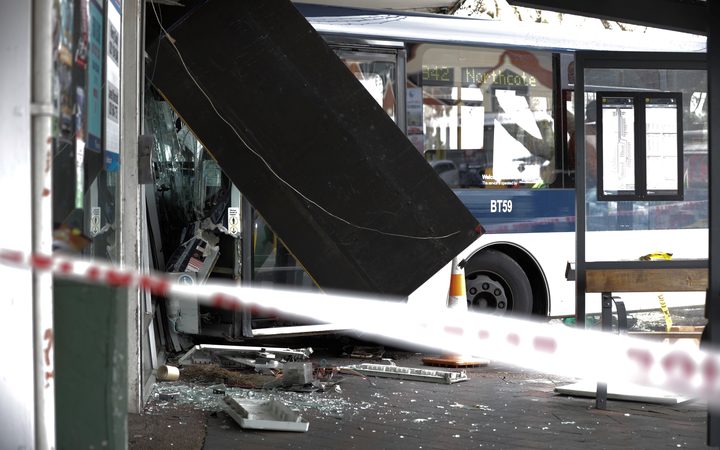 The bus was left sticking out of the shop. Photo: RNZ / Dan Cook

Karen Gibson was on the street collecting for a charity when she saw the bus hit a family that was walking across the pedestrian crossing.

"I just sort of froze actually, people were running in all directions," she said.

Harshal Shah, who worked at the Birkenhead Superette, said he heard a bang, went outside and called 111.

He saw a man lying on the ground and the man was asking about how his family was.

There was black smoke coming out of the bus.