Locals enraged by the botched cycleway in the Wellington suburb of Island Bay will likely have to wait another year for it to be fixed. 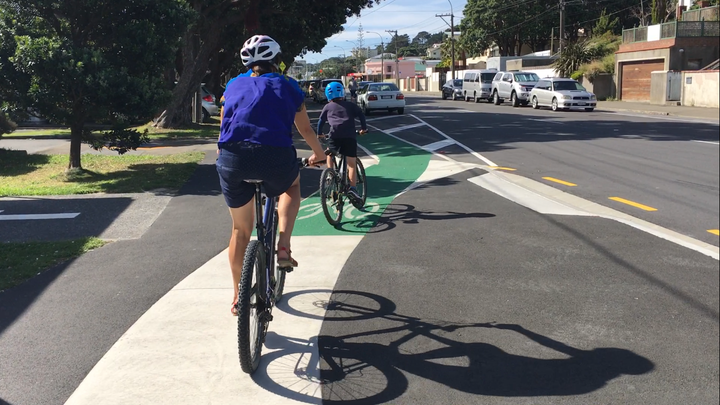 The Wellington City Council agreed in September last year to revamp the cycleway after locals fiercely opposed the design which saw the cyclists riding between the curb and cars.

However, work has not started yet as the council is hoping the Transport Agency will help cover $24m of the $32m project.

But the agency won't give funding for just the Island Bay section so the council must present a plan that covers the cycleway from Island Bay to the Basin Reserve, council documents show.

"This to me is really the only responsible approach given that we can access a significant amount more in government investment to connect the Island Bay cycleway through to the centre of Wellington."

The council would use what it had learnt from the Island Bay debacle while building the rest of the cycleway, Ms Fitzimons said.

The council would continue to do maintenance on the road over summer, including repainting markings in the middle of the road, and trying to remove old markings which were still visible.

It was not clear what the cost of changing the Island Bay stretch of cycleway would be but it was likely to be more than the $6m first budgeted, the council documents said.

The government was keen to see more safe cycleways in places like metro Wellington, but Rongotai MP and former deputy mayor Paul Eagle said he was worried about how much was going to be spent on just the Island Bay cycleway.

"My understanding is that the 1.7km Island Bay cycleway could cost anywhere up to $12m.

"That's a little too much for a cycleway of that length."

The $6m price tag put on fixing the Island Bay cycleway was always ambitious, he said.

"I'm fully supportive of more cycleways but really if it's going to cost more than $6m and they're using this as a mechanism to fund that extra cost - [they need to] just be upfront about it.

The cycleway has been mired in controversy since its inception in 2011 with more than 100 people marching through Island Bay in December last year. They were protesting against the council's proposed solution to raise the cycleway to the same level as the footpath so cars can park up against the curb.

The Island Bay Residents Association is pushing ahead with plans to file legal action against the council.