The all-women Queen's Honours investiture ceremony was held at Government House in Auckland yesterday and recognised contributions to everything from comedy to conservation. 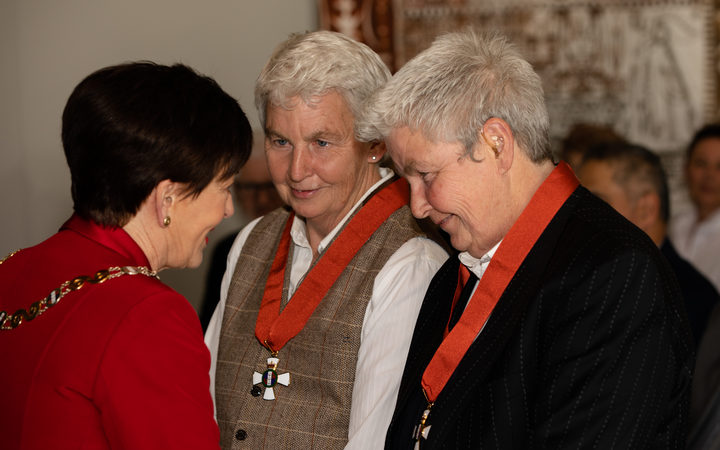 And it came with the Topp Twins' treatment.

Dames Jools and Lynda Topp drew laughs with their quips during the ceremony and ended it with a harmonised waiata about mana wāhine.

The duo were the first in line for the prestigious gong that recognised influence and expertise.

Dame Jools said it was not just their entertaining that led to the honour.

"It's all the things put together - the comedy, the music, the laughter, the political stance.

"You can't separate the politics from the cowgirl."

Their famous 'Kiwi bloke' characters Ken and Ken are likely to be dubbed 'Sirs' now, she said.

The ceremony celebrated only women in the year of 125th anniversary of women getting the vote.

And in that spirit, Dame Jools said a new tradition with a korowai (feathered cloak) was born.

"Women never were touched by the sword, so there was an idea that something else needed to happen."

It was "very exciting" to have the korowai placed on their shoulders.

The Twins' parents Jean and Peter watched on proudly.

"The big amazement to me is this: They can do anything at all, if they try hard, they've achieved it well," Mrs Topp said.

"That says a lot, it really does."

Ten other women were celebrated from fields such as athletics, neuro-science, marine conservation and women's health.

Elizabeth Bang was made a companion of the NZ order of Merit for her work setting up the Waikato Hospice and serving as president for the National Council of Women New Zealand.

Ms Bang, who already had an MNZM, was stumped over who nominated her.

"I was shocked when I got that.

"You don't do things to get recognition; you do things because they need doing."

The public should continue nominating others working in the community, so the work is recognised, Ms Bang said.

Athlete and star coach Kirsten Hellier was made an officer of the New Zealand Order of merit for her record-breaking Javelin throwing, and coaching the likes of Dame Valerie Adams.

"This is one way of creating visibility."

It was a "huge honour" for her personally but she also hoped it inspired others to get into leadership roles in sport.

"We need more wāhine warriors out there." 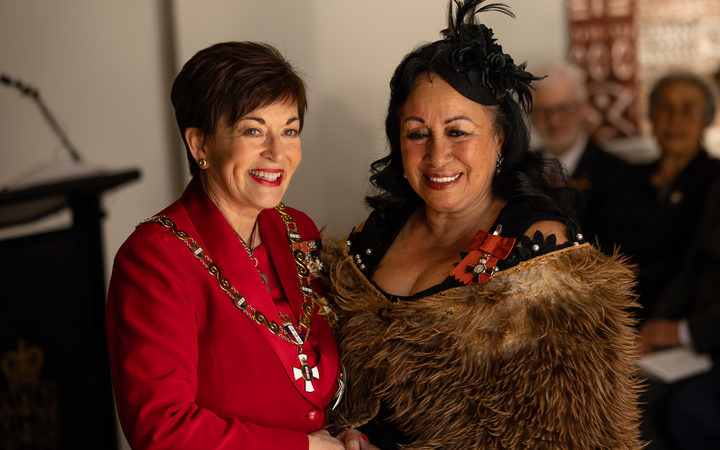 Christine Panapa was made a member of the New Zealand Order of Merit for her work setting up women's rugby league in New Zealand and her service to Māori through building a marae in Auckland.

Ms Panapa was cloaked in her great-great-grandmother's korowai, stitched with the soft tawny feathers of her two pet kiwi.

This honour is as much her parents as hers, she said.

"I feel so proud to think of that all the work that they did...and now I feel this is not about me, it's about everybody that's made it happen for me."

Six other ceremonies will take place this week including the knighthood of show-biz veteran Sir John Rowles.

Other women honoured at Monday's ceremony