A French cruise company and one of its captains have been fined a total of $100,000 for running a ship aground in a protected area of New Zealand last year. 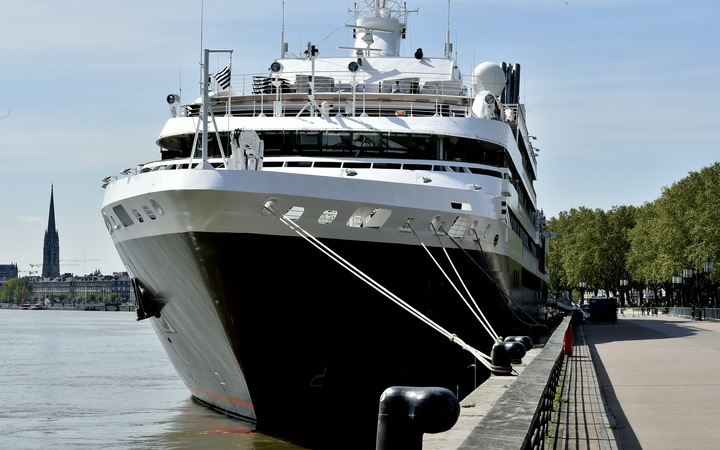 L'Austral moored at a wharf in Bordeaux in April 2016. Photo: AFP

Compagnie du Ponant and Captain Regis Daumesnil, a French citizen, were sentenced in the Wellington District Court today, after earlier admitting charges in relation to the grounding of the cruise ship L'Austral at the Snares Islands.

The company was fined $70,000 and the captain $30,000, for the incident in the remote New Zealand subantarctic islands in January 2017. The stern of L'Austral hit an uncharted rock 220m from shore.

Charges of endangering human life and entering a prohibited zone were brought by Maritime New Zealand and the Department of Conservation (DOC).

L'Austral had 356 passengers and crew on board. It was found to have had inadequate passage plans and failed to monitor the ship's position near navigational hazards.

As a result of the grounding the vessel's hull was punctured in three places, but rather than return to Bluff, the nearest port, Captain Daumesnil decided to continue on the cruise schedule to the Auckland Islands - a further 285 kilometres south.

The ship returned to Bluff several days later, when divers were contracted to inspect the damage, and temporary repairs were carried out.

Maritime New Zealand officers inspected the ship and began an investigation when made aware of the grounding and the discovery that L'Austral had also entered an environmental exclusion zone.

Maritime NZ compliance manager Mike Vredenburg said it could have ended in tragedy and was a graphic warning of why passage planning was mandatory in New Zealand and internationally.

"The Snares Islands are one of the jewels of our conservation estate and protected as a UNESCO World Heritage site. DOC expects all visitors to respect and comply with the regulations which are in place to protect and preserve this pristine environment."

The court directed that 90 percent of the fine laid under the Resource Management Act charges be awarded to DOC, which planned to use the funds for its Auckland Islands pest eradication project.