A man has erected two billboards in Wellington urging Ebert Construction to pay out its subcontractors. 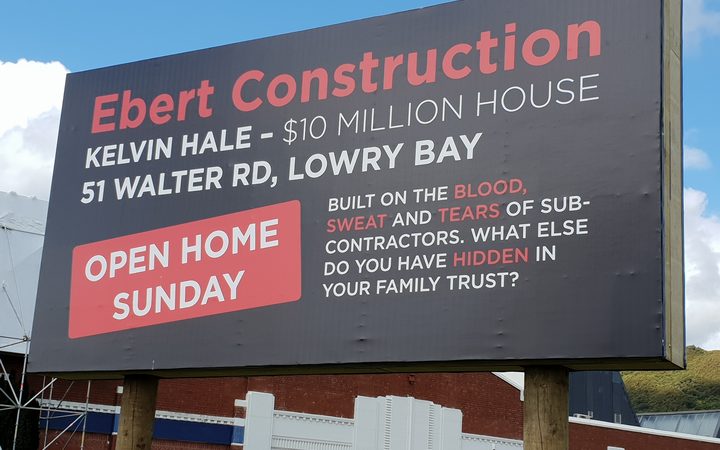 One of the billboards in Wellington raising concerns about money owed by Ebert Construction. Photo: RNZ

Ebert Construction folded in August, with initial reports putting the company's debt at an estimated $40 million.

Richard Burrell's latest billboard accuses the company's ex-director, Kelvin Hale, of using the blood, sweat and tears of subcontractors to build a $10m home in the Wellington suburb of Lowry Bay.

It also questions what is hidden in the Hale Family Trust.

Mr Burrell said he decided to put up the billboard when he heard Ebert owed his nephew, who is a plumber, more than $600,000.

His aim was to keep Ebert's and Mr Hale's names in the spotlight, until they fronted up to all those left out of pocket.

"Kelvin Hale has got $50 million or $60 million in assets, and we've done a bit of checking, he has just built a new $10m home...probably the best house that's ever been built in Wellington."

Mr Burrell said another billboard was planned for Ngauranga in a couple of weeks.

Mr Hale and the receivers could not be contacted for comment at the time of publication.