Department of Conservation staff visited a Northland power station on Tuesday to check out claims it is shutting people out of public reserves on the Wairua River. 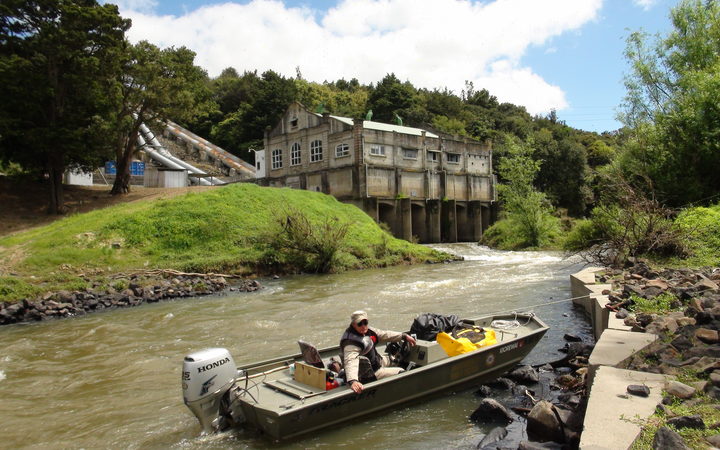 Millan Ruka on his boat with the Wairua power station in background. Photo: Supplied to RNZ

Northland's rivers campaigner Millan Ruka and Fish and Game NZ said locked gates installed by Northpower two years ago made it difficult to access the river and get to three nearby DOC reserves.

The small Wairua hydro station west of Whangārei had been generating power for more than a century, and was for decades a popular site for eeling and recreation.

Northpower had an easement over DOC reserve land to drive to the site, but the gates were on land it owned.

He was unaware of any accidents at the site, but said the company wished to prevent them.

"No power station in New Zealand would give people open access. We simply can't," he said.

Mr Ruka used to launch his boat or kayak from the power station site to carry out his river patrols, reporting on cattle that were damaging banks and fouling the water.

But since the gates went up he had been unable to do that and had to travel a long way downstream to launch.

"The gates are huge ... very imposing, you know showing it's a complete lock-off ... you'd think there was a nuclear power station or something behind them and it's not. It's just our 100-year-old hydro station," he said.

Mr Ruka, who was awarded the New Zealand Order of Merit in June for his conservation work, discovered in 2011 that Northpower was in breach of its resource consent.

The power company had no fish pass at the hydro station for the millions of elvers trying to head upstream.

He oversaw the installation of a mussel rope and water flow so the tiny eels could get past the power station.

Neighbouring Korokota marae, working with NIWA, then took on the job of collecting the elvers and trucking them safely to the upper catchment.

But the fish pass had not always been maintained, Mr Ruka said.

On one of his kayak patrols, he said he found the rope dry and elvers trapped at the bottom of the penstocks.

"The gates make it harder for me and others to fulfill our role as kaitiaki," he said.

Steve McMillan said Northpower had told Mr Ruka it was willing to escort him through the gates.

"We've taken Mr Ruka down there, and we are happy to do it again," Mr McMillan said.

Mr Ruka said his one supervised visit had been hard to arrange and turned out to be short, impractical and humiliating.

He said there had only ever been one serious accident at the power station when a child had fallen over the spillway and died, in the 1950s.

The hazard had long since been fenced off, he said.

Northpower had just applied to renew its resource consent for the power station and Mr Ruka had objected.

Fish and Game was also opposed. Its Northland Regional Manager Rudi Hoetjes said Northpower should have consulted Fish and Game as an interested or affected party.

Fish were stranded when the company drained the canal for maintenance, and the company lacked a plan to protect other native fish including whitebait, he said.

Mr Hoetjes agreed with Mr Ruka that the locked gates made it hard for the public to access the DOC reserves.

"That's quite an attractive area and people are wanting to visit those places," Mr Hoetjes said.

"The type of forest, with kōwhai and ribbonwood is quite unique to the catchment - it's some of the last remnants of what it used to be like before farming."

In the face of those complaints, Northland Regional Council had put Northpower's resource consent renewal on hold and asked it to explain and come back with more information.

The Walking Access Commission's Northland field officer John Gardiner said the public had to be able to access conservation reserves and he was working on the problem.

The Department of Conservation did not want to comment further.