More than 100 students walked out of a Hamilton high school this morning in protest after the principal said truants are more likely to wind up being a rape victim. 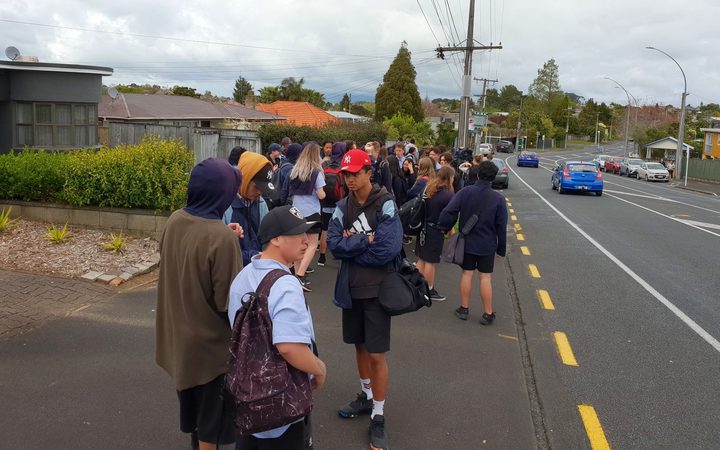 Fraser High students, after walking out of school over comments made by the principal. Photo: RNZ / Andrew McRae

Principal Virginia Crawford told a Fraser High School assembly last week that truants were also more likely to go to prison and commit or be a victim of domestic violence.

She said the more a student was truant, the more likely they will end up a statistic.

The students filed out of the school and up the drive to the road just before 10am.

They spent the next 40 minutes hanging around in groups on either side of the street.

Some students said they felt strongly that the principal had used language that probably was too strong and not appropriate for schoolchildren.

One student, Sih Hunia, said many of those protesting just wanted to stand up for themselves.

He said Ms Crawford should have toned down her comments.

Seventeen-year old Lauese Faaosofia was with the group who left the school grounds but he was against the protest.

He was critical of some of those who came out on to the road were smoking and going down to neighbouring shops.

"She (the principal) was trying to give us the message not to wag.

"These kids here now, year 9, they don't even know what they are here for.

"I support her message," he said.

But another student, Nohinohi Rolliston, was not happy with the principal's comments.

"The way she put it, put everyone down and made everybody angry."

The year 9 student said that at the same time, the comments rang true.

"Wagging is going to cause a lot of shit in life for us young ones.

"If she had explained it in our way for us young ones to understand then we would have been on her side."

Adam, who is a Year 12, said Ms Crawford pointed out the statistics but did it in an insensitive way.

"Not the right place or the right time to bring up like rape for a lot of people, all these insecure teenagers going through a rough time.

"As you are growing up you are going through so many changes and it is hard to comprehend.

"You don't tell people they are hopeless and there is just no hope," he said.

Two parents and another adult joined the protest to support the students.

Justine Kettle said just because some students were truants did not mean they were losers.

"I'd like them to learn, yes, but it's going to be hard to learn when you have got the principal telling you you are a loser and you are going to get raped because you wagged.

"It is sending the wrong message to the kids."

Jo Scott has one child at Fraser High.

She described the principal's comments as disgusting.

"They are kids, for God's sake, they are not losers.

"It was the words she used, I mean my daughter wagged and she's now doing courses and wants to become a mechanic and she's not a loser, so she's (the principal) got it all wrong, I am sorry."

Rosemary said a number of students had now been victimised by the principal.

"It's not just because they are not going to school I mean it's their choice but also you are suppose to be a staff member encouraging them and that (speech) didn't encourage them it just made them rebel against it so how much respect is she going to have with her students."

The three adults all agreed that Ms Crawford should front up and apologise.

In a written statement, the board's chair Jeff Green said the protest lasted for only period two, students returned for period three and the school was operating as usual.

He has asked for sensitive reporting on the matter as the school was mindful that it was a busy and important time of the year for students of Fraser High.