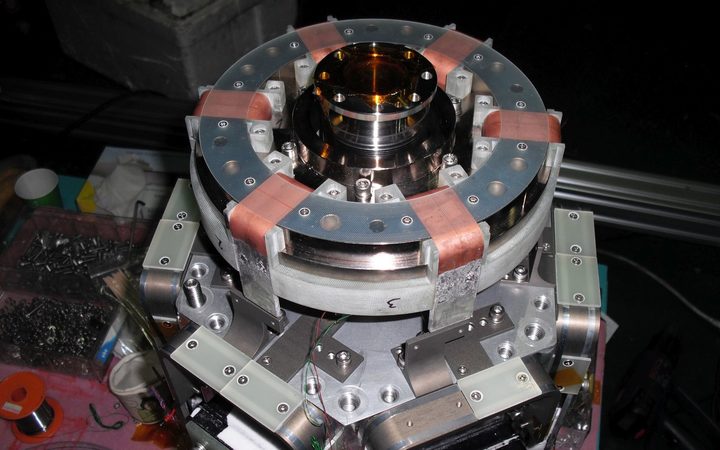 The super conductors carry a huge electronic current without losing energy, creating a much more environmentally friendly way to travel by air.

Ideally these conductors will be used to make hybrid commercial aircraft, lowering the large carbon footprint created when jet fuel is burned.

However, there's a catch: the magnets have to be kept extremely cold, which can be difficult when connected to a power source, meaning they're currently not widely used.

A scientist at Robinson Research Institute James Storey said his team had come up with a solution.

"What we've done in the institute is come up with a wireless power supply, which we call a flux pump and that allows us to charge up our super conducting magnet wirelessly, thereby making it cheaper to keep cold," he said.

The device works by attaching little rare earth magnets to a rotar, which passes the magnets over super-conducting tape.

Every time the magnet passes over the tape, it generates a current which at the moment can build up to about 700 amps.

To put that in perspective, a washing machine uses about 10 amps.

Dr Storey said the pump was currently being tested on a wind turbine in South Korea, showing there were a range of possibilities for the device.

"We're also in talks with China at the moment, they'd like a super-conducting transformer on their trains, that would help make their trains lighter, which would allow them to make faster trains.

"Again, we can employ our flux pump technology there, to help them charge up their super-conducting magnets," he said.

And the sky is not the limit for this technology.

Dr Storey said eventually this device could even be used for space technology.

"These magnets can create these huge magnetic fields, which allow you to shield a satellite from incoming particles, so again a flux pump would be great, to provide a cheaper means of charging up your magnets in space," he said.

The team has finished the first year of its five year MBIE project. At the end of the five years they hope to have completed a prototype motor, for electric aircraft.