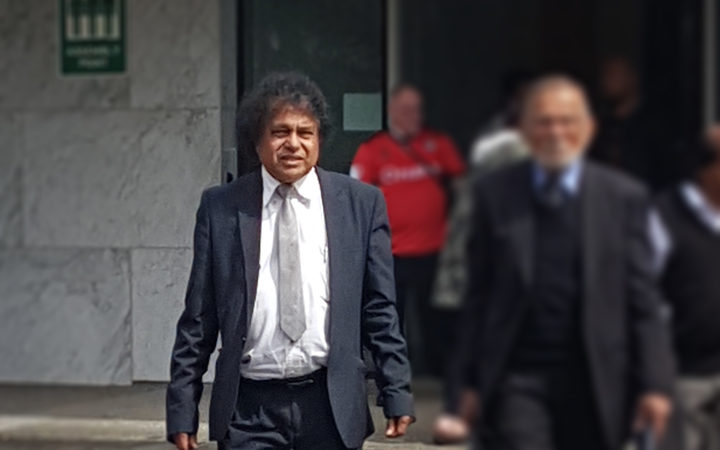 Today, the lawyer who helped a human trafficker fool Immigration New Zealand was sentenced to 10 months home detention with six months post release conditions and $1575 in reparations to the workers.

In 2014, Mohammed Idris Hanif provided legal services to Faroz Ali, who was found guilty of human trafficking in 2016 - the first conviction of its kind in New Zealand.

Hanif gave false and misleading visitor visa applications on behalf of the Fijian workers, so that the workers Ali had trafficked into New Zealand could continue working in his gib-fixing business.

Hanif provided applications on five separate occasions that stated the Fijian workers were genuine tourists, who were in New Zealand to sight-see and visit friends and family, which was false.

Hanif was used to appearing at the lawyers' benches of Manukau District Court but today he was in the dock.

He maintains his innocence and applied for a discharge without conviction, saying the charges were trivial.

The application was opposed by Ministry of Business, Innovation and Employment lawyer Shona Carr said Hanif provided false information to authorities on who and who should not be allowed in New Zealand.

She said the vicitms of the offending - poor workers from Fiji - had spent so much on getting to New Zealand that they could not pull out of the scam because they had to try and recover the money they had borrowed from friends and relatives.

"The victims were embarrassed and ashamed and left unable to repay their debt."

She said it would not be appropriate to give Hanif a discharge without conviction when he maintained his innocence.

Judge Gregory Hikaka said the matter was serious as it involved misleading Government officials who relied on lawyers to be honest.

The judge said the workers spent their time in New Zealand in squalid conditions and returned to Fiji in debt to friends and family.

Hanif has been a lawyer since 1987 but now his practising certificate has expired but the Law Society are aware of the charges and he still faces disciplinary action.

He's also been ordered to pay $1575 dollars in reparation to the workers.

Ali, the man who promised the migrants everything, only to exploit them was found guilty of bringing in vulnerable Fijian workers and exploiting them in 2016.

Justice Heath sentenced Ali to nine-and-a-half years in prison for 57 charges, including people trafficking, which he described as an "abhorrent" crime.

Ali headed an organisation that ran advertisements in a Fijian newspaper, promising people orchard and construction work in New Zealand at seven or eight times their pay.

They were charged exorbitant fees to travel to New Zealand, but when they arrived they were forced to sleep on the floor and had rent and food costs deducted from their pay.

Suliana Vetanivula was one of the workers, and her victim impact statement was read by Crown prosecutor Luke Clancy at Ali's sentencing.

"When I go out I feel ashamed to see the people I owe in my village. When I came to them for help, they were ready to help me and in return I didn't do my part. When I returned to the village I felt like I was not wanted anymore, like everybody sees me as a failure.

"It was like I stole money from them because they know that whoever goes to Australia or New Zealand for work, they come back with a lot of money."

Mr Clancy said Ali had expressed no remorse whatsoever and owed the workers $128,000 in fees and outstanding wages. He said that figure did not include the profit Ali made from their labour.

Ali's lawyer, Peter Broad, said his client had no other money available and was facing bankruptcy after being pursued by the Inland Revenue Department for a $126,000 tax bill.

Justice Heath said some of the workers were sent to the Bay of Plenty for orchard work, where the accommodation was shamefully poor.

"Three married women and one married man were taken to a house near Pyes Pa and told they would be staying in the basement with other people. There was no bedding to speak of and only one mattress was available. This in July 2014, in the midst of a New Zealand winter. That must have been extremely cold for people travelling from the tropical warmth of Fiji."

In sentencing Ali, the judge ordered him to pay reparation of $28,000 to refund the fees the workers paid.

"People trafficking is an abhorrent crime. It is a crime against human dignity. It undermines the respect that all of us should have for the human rights and the autonomy of individual people. Such conduct degrades human life. It is a crime that should be condemned in the strongest possible terms."