Students from one of Christchurch's most economically deprived suburbs will get free internet access at home under a trial scheme launched today. 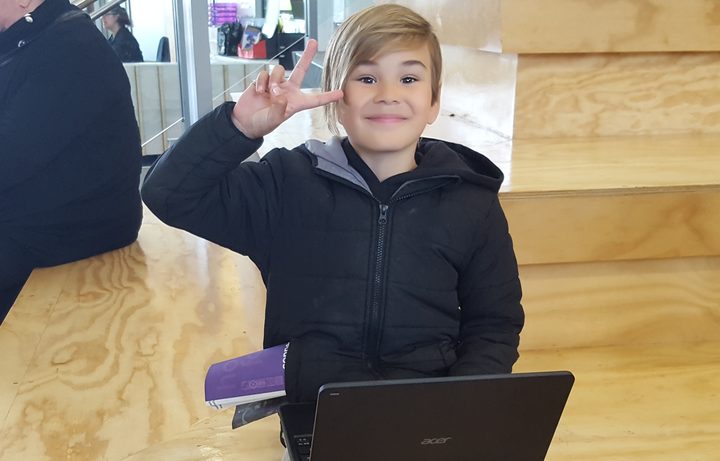 Seven-year-old Joseph Lawrence is one of the Haeata Community Campus students looking forward to accessing the internet at home under the new scheme. Photo: RNZ / Rachel Graham

Around 360 students from Haeata Community Campus, a school which covers Year One to Year 13 in Aranui, will now be able to access the internet from home.

The system allows access to the school network, so students can access the same websites and applications available via the school system.

The latest census figures indicated around 40 percent of the homes in Aranui didn't have internet access.

The trial will last for three years, and covers around a third of the students at Haeata.

A similar trial has been launched at Rata Street Primary school in Lower Hutt.

At Haeata the internet service will be provided via around 70 wifi hot spots attached to poles in the street by telecommunications infrastructure provider Chorus. Students can then use their school login to access the network.

In Aranui the wifi access will cover students who live in the area between Anzac Drive, Breezes Road, Pages Road, and Wainoni Road.

At Rata Street School access is via fibre directly to the student's home.

Chorus Head of Innovation, Mike Lott said different systems were used at the two sites because they wanted to experiment to find out which will be the best way to do it.

The project is a partnership between the private sector and Crown Agencies, with companies such as Chorus doing the work at no charge.

The other organisations involved are Cyclone, and the Crown Agency - Network for Learning, the Ministry of Education and the Greater Christchurch School Network Trust.

Mr Lott said they wanted to learn how the system would work, and whether it could be expanded further.

One of the children who will benefit from the system is seven year old Joseph Lawrence, who said he was really happy to be able to get access to the internet at home.

He said he would now be able to "learn waiata, Māori stuff, and see Māori people" online.

Haeata Principal Andy Kai Fong said the internet and devices are luxuries many of his students' whānau cannot afford, and the trial will level the field for his students in a way which much of New Zealand takes for granted.

"Learning doesn't happen without wifi and internet access these days," said Mr Kai Fong. "I'd defy you to find a school that's promoting quality learning that doesn't involve that access. It's about evening up the playing field and giving that access to everyone."

Stuart Wakefield, chief information officer for the Ministry of Education, said the service would not be providing unfettered access to the internet.

"What we have done is take the content filtering that is applied at the school and extended that out into the community," said Mr Wakefield. "So whatever policy settings the school has set on, in consultation with the community, is the same service the kids get at home."

Mr Wakefield said the best information the Ministry has at the moment is that around 50,000 homes, and about 100,000 school-aged children around the country don't have internet access at home.