Patients paying extra to stay on a brand of antidepressants, are now being told the supply will run out next year. 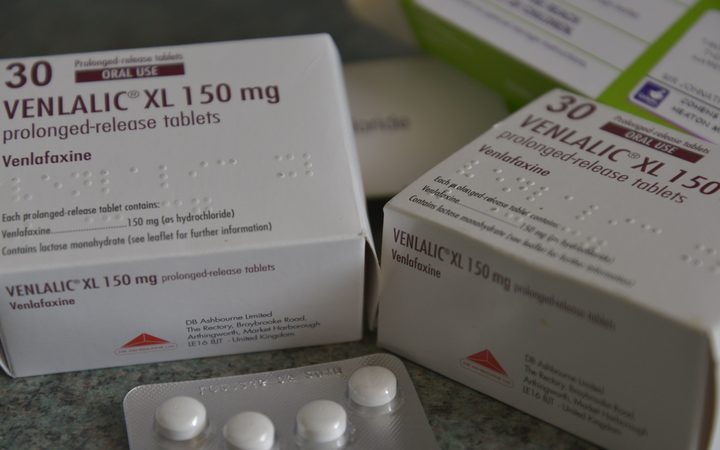 Venlafaxine, a medication for the reduction of the symptoms of anxiety and depression Photo: AFP

However, after experiencing adverse reactions some people have gone back to the Arrow-Venlafaxine brand, saying they'd rather pay extra than face the side effects.

Vicki Carey said she had no energy on Enlafax-XR.

"I was thinking suicidal thoughts regularly, just about every other day, it was scary, it was scary for my husband, I didn't go anywhere," she said.

"I was losing my appetite terribly and it actually got the the point where I collapsed one evening from the tiredness and the ambulance was called and we started to realise there was something wrong with the Enlafax," he said.

Ms Carey has been back on arrow venlafaxine for eight days and was looking at changing medications again, to limit the withdrawals of coming off arrow-venlafaxine when the supply runs dry.

But Mr Pinny, who has seen a big improvement since changing back, said that was not possible for him.

"It only took two or three days and I was back to my normal self, I'm very concerned because it works for me and I don't have an alternative," he said.

Both said they tried other antidepressants in the past, but they both feel better on the arrow-brand.

However, Teva Pharmaceuticals only had a six to seven month supply left in the country and after that would no longer be shipping the medication to New Zealand, because it was no longer financially viable.

During the consultation process held by Pharmac, four submitters in the health sector warned those suffering with mental health conditions, were more adverse to medication changes.

One submitter specifically raised concerns around future supply of medications.

However, Pharmac said having multiple brands of a product doesn't necessarily improve the security of supply.

"We created an online learning module that was aimed at healthcare practitioners to learn about the science behind generic medicines, the impact of branding and give them some practical tips on supporting patients," she said.

Ms Williams said pamphlets were also made for patients in several languages.

Pharmac maintained the generic brand acts the same way as the other medications.

Pfizer, which supplies the other now unsubsidized brand, Effexor XR, said they were still committed to supplying the medication to patients.

Heather Williams who runs the Facebook group 'ENLAFAX - problems with medication brand change NZ' said they're now looking at other avenues for those wanting Arrow-Venlafaxine.

"There's nowhere else currently here in New Zealand that I'm aware of that makes this particular brand of the venlafaxine, so the next option is looking overseas," she said.

Ms Williams said the response they've had on the Facebook page showed there was still a big demand for the medication.