By George Block, for the Otago Daily Times

Another Dunedin cat has come within a whisker of death after being shot in the head, and her family says the ''sick'' assailant needs psychological help. 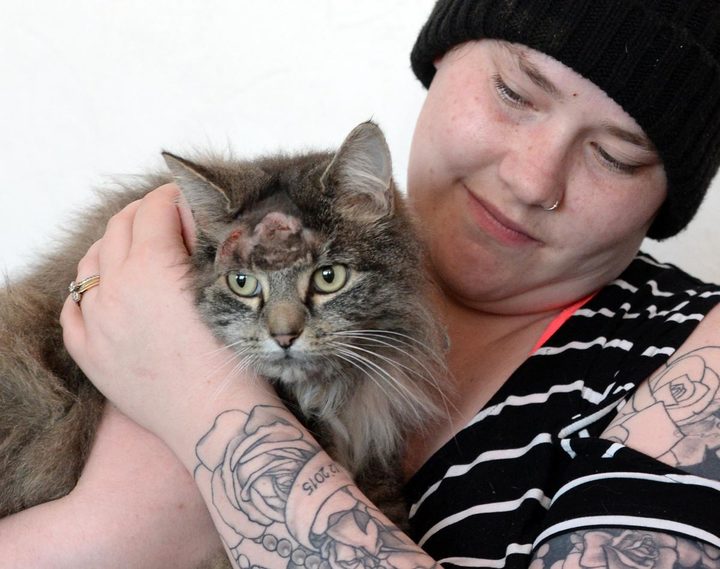 A survivor of two air-gun shots to the head, Toast, recovers at her Concord, Dunedin, home with the owner's daughter, Nicole Serong. Photo: ODT / Linda Robertson

Concord tabby Toast is now the second Dunedin cat known to have survived a shooting this year.

Her tale of survival is all the more remarkable given two pellets, believed to be from an air rifle, were found lodged in the cat's skull.

Speaking on behalf of her mother who owns Toast, Nicole Serong said her mother noticed on Monday the cat had a suppurating forehead wound.

''When she squeezed it, tablespoons of pus came out, and then the pellet.''

An X-ray found another pellet was lodged in the cat's skull, and it was extracted by the vet, Mrs Serong said.

She believed the shooter was likely to live in the Davies and Mulford streets area near her mother's home, and worried about the assailant's mental state.

''They are sick and need to get some help.''

The incident would be reported to both police and the SPCA, she said.

While Toast was expected to survive and appeared in good spirits yesterday, her owner was in for a hefty vet's bill.

Mrs Serong had established an online fundraising page and had raised more than $1500.

Herself a ''foster mum'' for Cat Rescue Dunedin, Mrs Serong said any surplus money would be given to the organisation.

Earlier this year, a young tabby belonging to Fairfield woman Bonnie Smith was shot in the leg near her home.

Ms Smith said yesterday it was ''terrible'' to learn another cat had been targeted.

Izzy had made a partial recovery, she said.

''She managed to keep her leg but now has a bad limp.''

The offender has not been caught.