When a stranded whale dies on the shores in New Zealand, it is likely artist Chris Charteris will get a call. 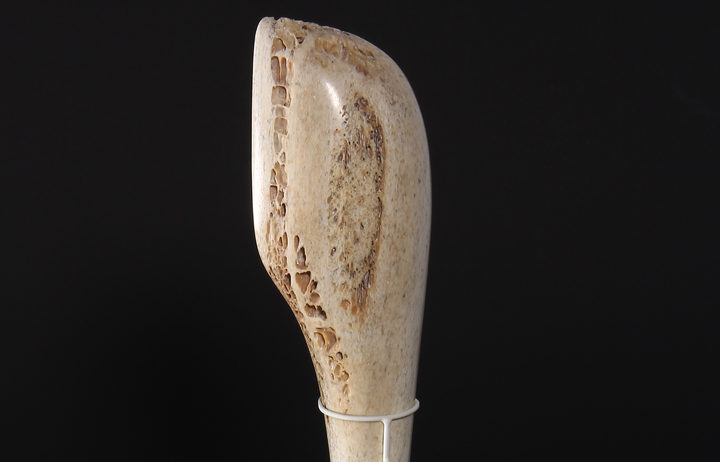 The artist uses whale bone as part of his traditional Māori carving.

One of his latest carvings uses bone that travelled around the world to reach New Zealand.

It's the focus of an application to the Department of Conservation to hold, import and export the carved sperm whale jaw bone to Australia for its new owner.

The bone was originally harvested from a dead sperm whale that was stranded on a beach in Scotland in 1977.

Accomplished Māori carver Major H Woods acquired it later that year from the British Museum before he exported it to New Zealand in 1994.

Mr Woods sent a crate with the bone in it to New Zealand, intending to return to his country.

However, he passed away before he could travel back to carve with it.

Mr Charteris was asked whether he was interested in buying the bone from Mr Woods' estate in 1998 as he was supplying Auckland Museum with carvings.

Only 37.2 centimetres in height, it's a small, but valuable piece.

The jaw bone was particularly prized as the most solid part of the skeleton, he said.

"I'd consider all of the skeleton remains of the whale are equally precious to me."

Mr Charteris has been working with whale bone since the 1980s.

It's a controversial material to be working with, even though the bone is collected from dead beached whales.

He described a guilt people still appeared to feel about the slaughtering of whales to "light the lamps of London".

"I think we still have a residue of guilt.

"I feel that if I have the opportunity to work with that material then it's my job to honour and to do the best that I can with it.

"It is a part of my heritage to be involved in using whale bone, there's quite a strong connection to the material and to the whales."

Technology made bone carving a lot simpler and quicker, he said.

"It has made what would have been a number of years ago a very labour intensive process, a lot more efficient."

Submissions close for the permit to export the carved jaw bone on 20 September.