As the kowhai blooms, some residents around Wellington are being treated to frenzied, flocking displays by ever-increasing numbers of tui. 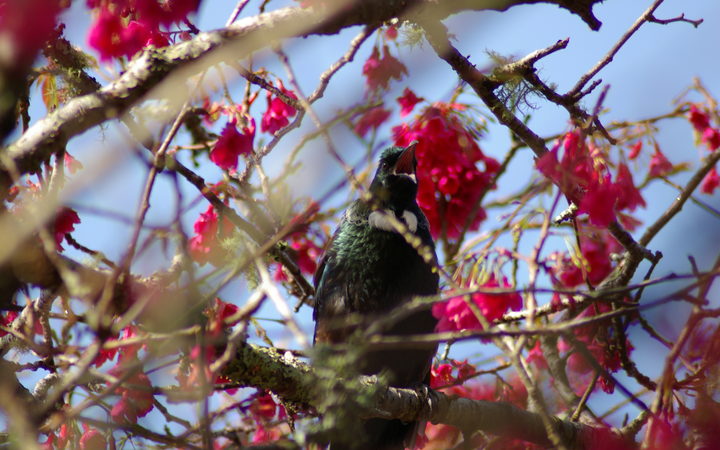 Up to 40 or 50 birds can turn up in a frantic, noisy flashmob. After four or five minutes of frenetic activity, they then fly off squadron-like to find another golden kowhai nearby.

Principal science advisor with the Department of Conservation, Hugh Robertson, said due to community trapping efforts, predator-free programmes and the effect of Zealandia, the numbers of tui flocking like this are growing and becoming more noticeable in residential areas.

Kowhai is a tui's prized food and the flocking behaviour is a mix of excitement and aggression, he said.

A few tui will arrive on a tree and as more follow, it becomes a fight to defend the tree from the other birds, he said. When too many arrive it just becomes an uncontrolled free-for-all and they eventually give up and move on.

The kowhai is a bit later to bloom this year so the tui have been waiting a little longer which could explain the more aggressive, flocking behaviour, Mr Robertson said.

Tui can fly long distances and may be coming into Wellington from as far away as Kāpiti Island to get their fill of kowhai.

Once the kowhai is gone tui will move more quietly onto rewa rewa and flax, he said.