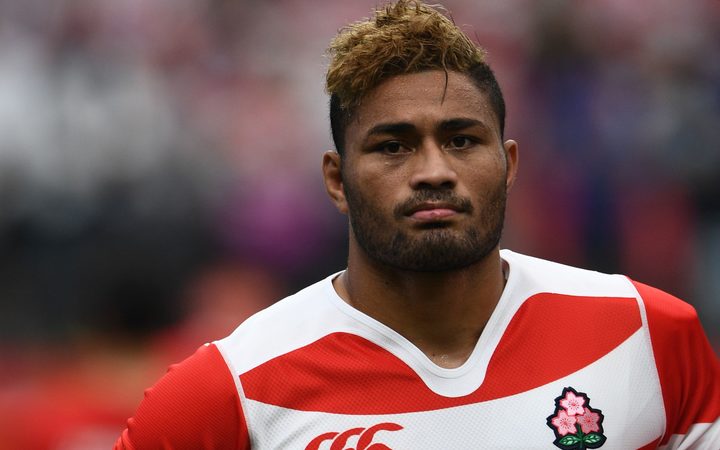 Amanaki Mafi is now living in Japan but the charge stems from an incident which occurred in Dunedin on 14 July. Photo: AFP or licensors

The 28-year-old Japanese international representative is charged with injuring with intent to his former team-mate and childhood friend Wallabies lock Mr Timani.

The charge stems from an early morning incident in South Dunedin following the Rebels 37-43 loss to the Highlanders on 14 July.

Mr Mafi did not appear in the Dunedin District Court this afternoon, but his lawyer Anne Stevens entered the not guilty plea and elected trial by jury on his behalf.

At his last appearance, last month, the court heard Mr Timani's counsel had reached out to discuss the possibility of a restorative justice conference between the pair.

Mrs Stevens told the court today that meeting had yet to take place because of complications the conference facilitator had faced in organising it.

Both were fined $AU15,000 by the Rebels following the incident for breaching team protocols, and Mr Mafi was stood down by his Japanese club until court action was finalised.

Mr Timani told the Sydney Morning Herald of the assault: "I thought I was going to die".

He claimed the attack arose because he had used a swear word in front of Mr Mafi's sister.

The pair were drinking at a South Dunedin address early on 15 July following the loss, which ended the Rebels' finals hopes.

Mrs Stevens told the court Mr Mafi was arguing the statute of self-defence.

Judge Kevin Phillips said it was "highly unusual" that the victim and defendant would meet for a restorative justice conference considering the not guilty plea.

However, he allowed it to proceed and a non-association order - part of Mr Mafi's bail conditions - could be lifted to allow the pair to talk.

The case will next be called in November. Mr Mafi remains on bail and his appearance at the November date is also excused.