Tegel will not be prosecuted by the Ministry for Primary Industries over dead and injured birds at one of its farms because the minimum welfare standards have been met, the ministry says. 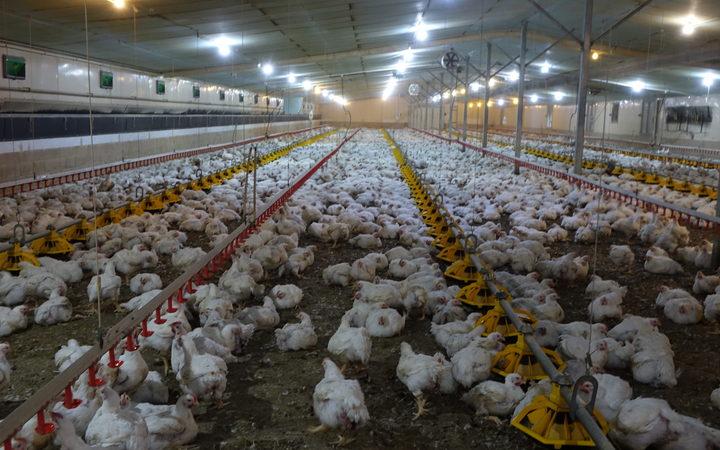 In July, Direct Animal Action group filmed birds struggling to stand up, being trampled on, bearing open wounds and some decomposing at a Tegel farm in Helensville.

In response to the video at the time, Tegel chief executive Phil Hand said the wounds in the footage shot by Direct Animal Action were interesting.

"[We] wouldn't normally see that and I can't comment on what would have happened that day - I wasn't in the shed," Mr Hand said.

"But as with any animal, not all of them will be perfectly healthy throughout their entire life, no different to humans."

Mr Hand said the farmer goes through the shed multiple times a day to cull any birds that are unwell, as required by the code of welfare.

However, Direct Animal Action said it was appalled the company had not been sanctioned for its treatment of birds.

"These types of results definitely do encourage companies like Tegel to not take animal welfare seriously.

"They know that even if they're caught out with video footage that's undeniable then they're just going to get a slap on the wrist, if that."

But it said 10 dead birds in one shed that housed 23,000 birds equates to 0.17 percent mortality rate, which is lower than the one percent threshold to trigger an investigation.

The ministry's compliance investigations manager Gary Orr said a daily removal of dead birds happened in the morning and it was not uncommon for birds to die during the day.

"The operator at the farm was checking the birds twice daily, which exceeds the minimum standard," Mr Orr said.

"At the end of the day we concluded that the minimum standards had been met and no breaches of the Animal Welfare Act."

When there was no breach of the Act, the ministry would give guidance to the property manager to meet the guidelines of the code of welfare, he said.

"We pointed out what their responsibilities are under the code of welfare and what the consequences are if there was a detected breach of the Act."

It has advised Tegel to be more thorough with its checks in relation to the injured birds.

Ms Sims said there should be an independent compliance system set up through establishing a Ministry for Animal Welfare.

"MPI clearly have a conflict of interest - they are in charge of production as well as animal welfare and it doesn't work," Ms Sims said.

"We use veterinarians to give technical advice and they are, 90 percent of the time, not MPI employees."

He said MPI's record of prosecuting showed it was serious about animal welfare.

"We are genuinely concerned about the welfare of animals in New Zealand and it's not something we shy away from," Mr Orr said.

"We don't go in with a soft approach."