Police investigating a shooting at Taranaki Base Hospital last month have made two arrests after raiding the headquarters of the Highway 61 gang in Waitara, also seizing firearms, ammunition and vehicles. 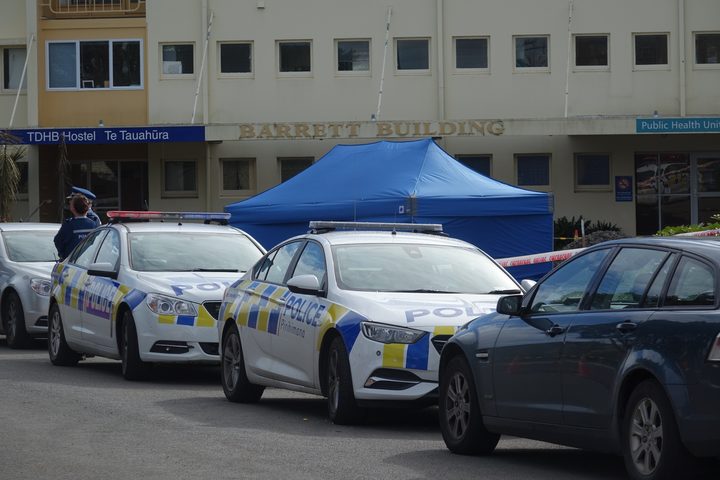 Police cordon off an area at Taranaki Base Hospital after a shooting incident in August. Photo: RNZ/Robin Martin

Detective Mataku said a number of items of interest had been seized.

"From the Highway 61 gang we've recovered a white van that we believe was used in the shooting, as well as three rifles and a cut down sawn-off shotgun and significant amount of ammunition."

Today's raid followed the execution of a similar search warrant in the Coastal Taranaki settlement of Warea on Friday.

A 49-year-old New Plymouth man was due to appear in court today on firearms charges, while a 47-year-old Waitara woman was facing a charge of being a party to a wounding.

Detective Mataku said investigations were ongoing and he expected more arrests in relation to the shooting.

A 43-year-old New Plymouth man received shotgun pellet wounds to his legs, back and head during the August 1 attack in the grounds of the hospital's Tukapa carpark.

The man has since been discharged and was recovering from his injuries.

Detective Mataku said public safety was not at risk.

"This shooting involved two parties known to each other and I want to reiterate we don't believe there is a wider risk to members of the public."