A legal battle over a proposed Chinese Garden planned for Frank Kitts Park on Wellington's waterfront has continued today. 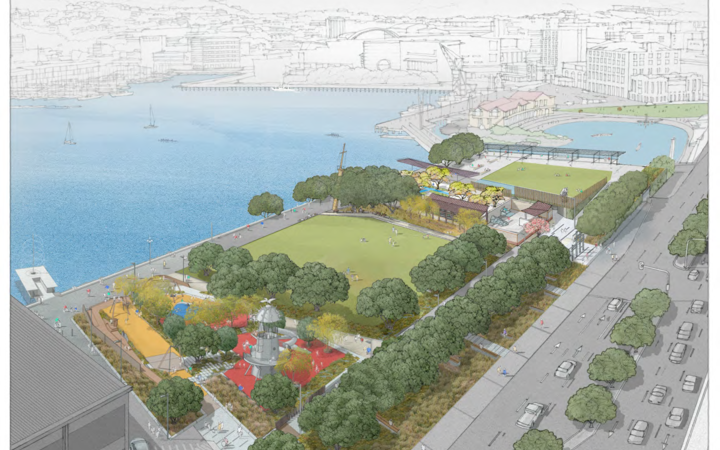 The plan for the new Waterfront park. Photo: Supplied

In April, the Environment Court threw out appeals against the project, but today the lobby group, Waterfront Watch, appealed against that decision in the High Court.

At the Environment Court hearing Waterfront Watch said the Chinese Garden would lead to a loss of green space and would impede views of the Harbour.

Its lawyer told the High Court today that if the Chinese Garden went ahead, it would also lead to the loss of a walkway linking the city and the waterfront, which functioned as both a physical connection and a visual link between the two.

City Council reviews in 2005 and 2006 listed Frank Kitts Park as an outstanding element of the waterfront and that had not changed, he said.

"The up-to-date reassessment by council ... hasn't led council to update the image used," the lawyer said.

"Also the review shows that whatever the qualities Frank Kitts Park had in 2005 and 2006 that warranted its inclusion as an outstanding element, it still has.

"Plan Change 48 showed [elements] that had been removed or altered to reflect changes that had occurred. That didn't happen with [Frank Kitts Park]."

However, the council's lawyers questioned points raised about the viewshaft from a prominent corner in the city, Stewart Dawson's corner, towards the Harbour, which Waterfront Watch said would be negatively affected by the Chinese Garden.

"The viewshaft only protected the view from there to Frank Kitts Park. It did not protect elements of the park itself," the council's lawyers said.

Regarding the loss of the City Link Walkway, the council's lawyers said it was inconceivable that the Environment Court did not appreciate that building the Garden would replace that.

"In terms of the impacts of the proposal on the issue of wider connectivity across the park to and from Jervois Quay, the Environment Court concluded that it would be greatly enhanced by the removal of the promenade wall and the amphitheatre," the council's lawyers said.

"Again, such an assessment must have proceeded on the basis the City Link Walkway would be removed, as it currently leads up to the promenade wall."

Justice Cull is expected to reserve her decision.