Les Drummond, 65, is looking forward to his first holiday in six years. 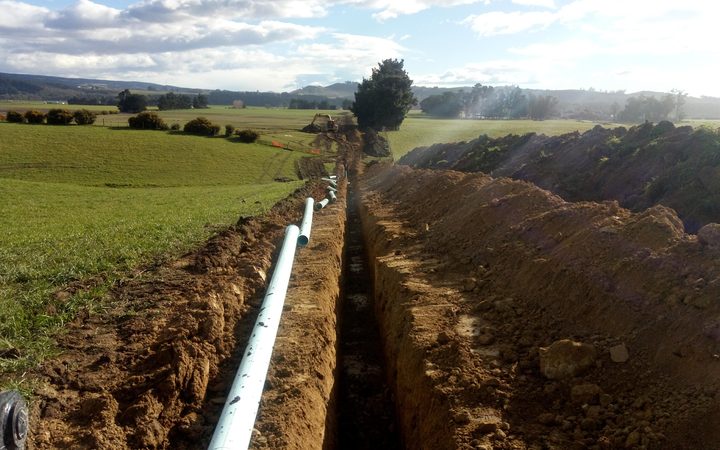 He's been the contracted caretaker of the Herbert-Waianakarua Rural Water Supply in the Waitaki district for the past 25 years.

But a newly completed pipeline means he will soon be able to take a well-earned break from a job he says has been 24/7.

Mr Drummond is not the only one set to benefit from the 34km of new pipeline installed between the Ōamaru Water Treatment Plant south to Hampden.

More than 1200 residents living south of the Kakanui River to Moeraki will now have access to drinking water that meets the New Zealand standards.

There was no filter system before the pipeline was linked to the treatment plant, Mr Drummond said.

"It really relies on me watching the rain gauge and see how much rain we get and running down to the river and have a look at it," he said.

"Sometimes you're down there at 2 o'clock in the morning looking at things."

If he didn't, he said the river would come up and the water supply would become filthy.

"It boils back to water quality, really."

Mr Drummond remembered working on fixing the system for up to five days when major floods came through.

About three years ago, the river froze over, freezing the underground pipes.

"We ended up getting fire hoses and connecting them to the pumps to run them up the hill and into the tanks so we could get water into the transfer tanks so the main pumps could pump it from there," he said.

Being a caretaker was a full-on job - he repairs any damage, does all of the pumphouse duties, dealing with anyone not getting water, and checking water restrictors.

He also dealt with anyone illegally tapping into the water supply.

This is all done in addition to his plumbing contracting business.

But now Mr Drummond has a break in sight: "I'm looking forward to doing a bit of whitebaiting over the Haast this year."

Water was switched on last week, despite facing a few hiccups along the way.

Council assets group manager Neil Jorgensen said it was a highly cost-effective way to improve the supply and meet the Drinking Water Standards, which came into law more than a decade ago.

"Not only does the community now receive high quality water, their supply will no longer need to be turned off during flood events and or impacted by droughts," Mr Jorgensen said.

"The pipeline also allows more capacity for population and economic growth in the area."

Waitaki District mayor Gary Kircher said the project's success was dependent on the hard work of council staff and contractors, engineering expertise and the support from more than 40 landowners and other stakeholders.

"Despite several challenges, including wetter-than-usual ground conditions and the Mycoplasma bovis outbreak, staff and contractors have done a fantastic job in completing the project and delivering high quality water to customers on schedule," Mr Kircher said.

"Having the support of landowners along the pipeline route has also been critical to the project's success, and I'd like to thank them again for their understanding and patience over the last two years."

The commissioning of the pipeline will be officially celebrated on 15 September.