A Corrections officer says he was fighting for his life as he wrestled with two prisoners armed with shanks. 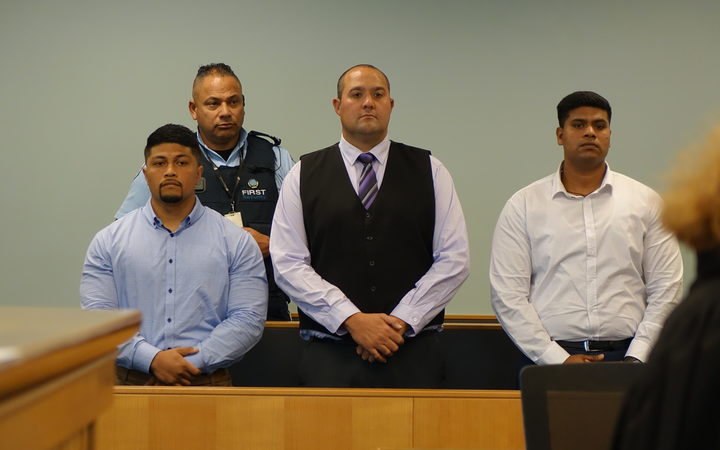 Desmond Fa'afoi was repeatedly stabbed and cut around his head and neck area.

The 27-year-old is accused of kicking one of the prisoners who stabbed him three times in the head as the prisoner lay on the ground surrounded by other officers.

The father-of-one, and former soldier, was working inside the maximum security prison, Paremoremo, patting down prisoners as they left the recreation room and made their way to their cells - known inside as a rec-movement.

"And then as Leroy called for the next prisoner, that's when I felt the blow to the back of my head," Mr Fa'afoi said.

Two of the prisoners - Trent Wellington and Samuel Junior Hutchins - are members of the street gang The Killer Beez. A third prisoner Mitai Angell is an associate of the gang.

Mr Fa'afoi held his arms up as the blows continued, he said.

Mr Fa'afoi blanked out and remembers lying on the stairs between the cell landings of Bravo block.

"I was confused, I didn't know what was going on. I was like ... I was real dizzy. I just remember tumbling my way to where the officers were struggling with the prisoner," he said.

The next thing he remembers is waking up in hospital, he said.

Mr Fa'afoi said he was wearing a body camera. He was asked by his lawyer Todd Simmonds if he turned the camera on.

"To be honest, I didn't have enough time. I had two prisoners attacking me, I couldn't ... I was fighting for my life so I couldn't really turn it on."

He had been in the job just two years.

Mr Fa'afoi said he had no memory and no intention of kicking Mitai Angell as the prisoner was held down on the ground by his colleagues.

Mr Fa'afoi was left with a puncture wound to the back of his head and cuts to his face and forearms.

He will be cross-examined by the Crown prosecutor Jo Murdoch tomorrow.

Mr Fa'afoi's colleague, Wiremu Paikea, is accused of putting Angell in a figure four foot-lock and breaking the prisoner's leg and dislocating his ankle.

Corrections officer Viju Devassy is accused of attempting to pervert the course of justice by turning a camera away from Angell as he lay on the ground surrounded by officers.

The trial, before Justice Gordon and jury, has been set down for a further two weeks.