The death of American soul singer Aretha Franklin from pancreatic cancer has put the spotlight on the treatment options available to New Zealanders. 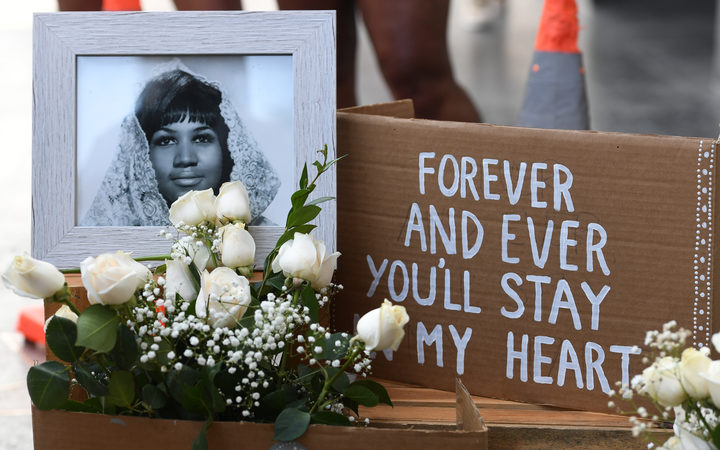 Flowers and tributes are placed on the Star for Aretha Franklin on the Hollywood Walk of Fame in Hollywood. Photo: AFP

More than 2000 people have pancreatic cancer in New Zealand, and one person is diagnosed every day.

New Zealanders who have the disease are having to pay up to $60,000 to travel to Australia for a specialised treatment because it is not available here.

There are two forms of pancreatic cancer - the uncommon pancreatic neuroendocrine or the more common type, pancreatic adenocarcinoma.

" went into the [emergency department] and I was pretty much diagnosed with cancer - they defintely found tumours on my liver. My cancer's too far gone, so there's no cure. We can prolong the cancer, and that's with (peptide receptor radionuclide) therapy."

Peptide receptor radionuclide therapy (PRRT) is a molecular therapy used to help relieve symptoms and slow the progression of the disease.

But people, such as Ms Milo, were having to travel to Australia to prolong their life expectancy because the treatment was not yet available in New Zealand.

Wellingtonian Chris Holmes, who also has the disease, had also headed over the ditch for treatment.

"I got to the point where [I ran out of options in New Zealand]. I spoke to a friend of mine. He alerted me to [peptide receptor radionuclide therapy] in Melbourne, which is only available in about five or six places globally."

Mr Holmes said the Ministry of Health has to find a better way for New Zealanders to access the treatment.

"I think we need the facilites and the specialists, but that's tricky. In the first case, it would be providing some mechanism for helping people get to Melbourne for the treatment. It's certainly providing me with longer life expectancy."

Ms Milo said it should not be so difficult for people to get the treatment they need.

"I was offered [oral chemotherapy]. With that you take two weeks on, two weeks off - that would be one round. I did two rounds, and we had a quick look at the tumours and there was no improvement, so PRRT was the next step."

"We need to see the health system ensure that [PRRT] is established here. We have been working with Pharmac for the funding, which is looking promising. We're not quite there. It would absolutely change these patients lives if they could recieve treatment in New Zealand.

She said there were significant implementation issues, which the agency plans to discuss with district health boards and the Ministry of Health.