Tangata whenua have stayed overnight at a Northland beach to protect the carcass of a humpback whale. 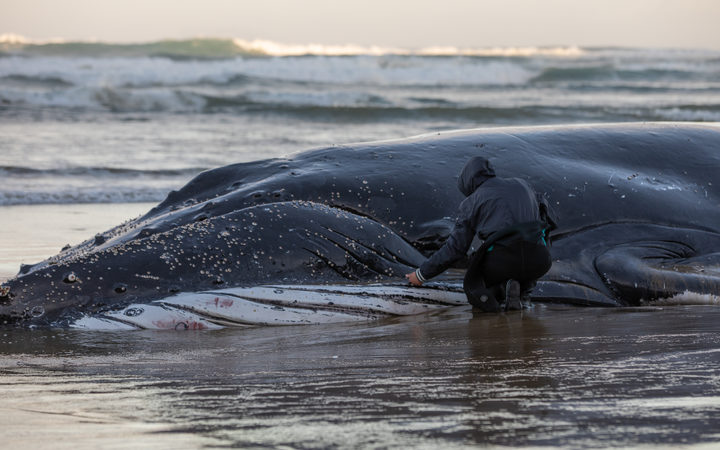 Attempts to rescue the whale after two days of being stranded at Ripiro Beach have failed. Photo: RNZ / Dan Cook

The adult female was found on Ripiro Beach west of Dargaville, but rescue attempts to refloat her failed and in view of her deteriorating condition, she was put down yesterday.

Her calf died on Monday.

The general manager of Te Roroa Trust, Snow Tane, said staying overnight was to try and stop the opportunists from trying to deface the whale or to take anything from the carcass.

He said iwi members will today begin preparing the carcass for burial above the high-tide line.

The whale's fate was a distressing one, but in Māoridom it can be seen as a sign, he said.

"I know that in the past we've had beachings after an earthquake and I know there was a big earthquake up in Indonesia but you know, that's just a theory."

He said whale experts have said the calf was potentially playing, or frolicking, around and became stranded.

"We've conducted karakia from the very first day. Of course, that karakia changed when there was a death with the baby and then of course the karakia for the past couple of days has been really focused on the mother."