Researchers are using a popular computer game and Lego to creatively teach children about emergency planning. 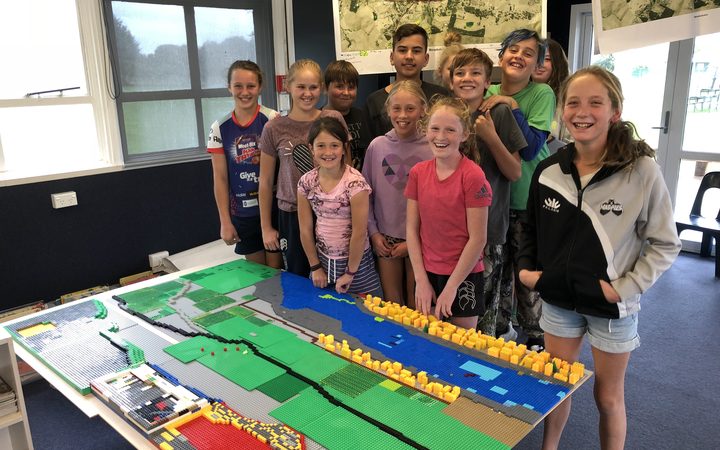 Year five and six students at Maraekakaho School in the Hawkes Bay region, have been using the online video game, Minecraft and LEGO bricks to map their community. Photo: RNZ / Charlie Dreaver

Year five and six students at Maraekakaho School in the Hawkes Bay region, have been using the computer game Minecraft, and Lego bricks, to map their community.

Researchers from the University of Auckland, Auckland University of Technology and East Coast LAB came up with the idea to teach children about local hazards and what resources could be useful in an emergency.

The initiative is part of a two year project, funded through the Ministry of Business and Innovation's National Science Challenge.

Researcher Nickola Loodin said she has been investigating how to include children in disaster planning.

She said she focused on the Lego map and the final product made by the children measured 190cm by 114cm.

"It represents just over 3.12 kilometres by 1.92 kilometres of their actual Maraekakaho Community.

Ms Loodin said children are one of the biggest groups affected by natural disasters and war.

"The idea of children being vulnerable is a very common notion, but they hold valuable knowledge of their environment and they have the capacity to conduct risk assessment and participate in the planning and preventing disaster," she said.

She said the Minecraft and Lego maps are interactive ways for the children to express their ideas through active playing.

"When they were building the map you could really see they were so engaged and really took ownership of the process themselves," she said.

She hoped to be able to take the project to other parts of the country, however she would make a few adjustments.

"It would be amazing to do this in other schools, but I would make some changes because it can be quite labour intensive, it's a lot of little bricks, and when you stand on them its not that pleasant," she laughed.