There's no chance either the Pink or White Terraces, one of the wonders of the world in Victorian times, are buried on land at the edge of Lake Rotomahana, GNS Science says. 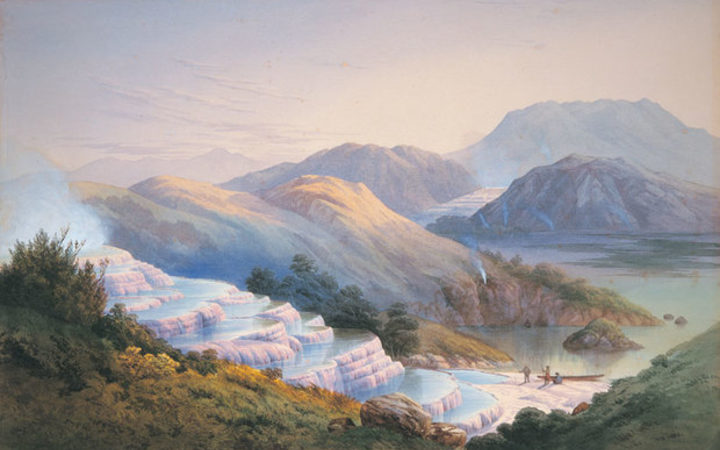 Painting of the Pink and White Terraces by John Hoyte. Photo: Otago University

That comes after research published in March suggested it was possible.

GNS studied the area extensively several years ago and concluded the White Terraces were likely obliterated in the 1886 Mount Tarawera eruption, and the Pink Terraces could be partially intact on the lake's floor.

"In the last 18 months or so there's been some work done by others that has suggested that the pink terraces - or what may be left of them - and or the whites are not in the modern day Lake Rotamahana but potentially on land on the margin of the lake today.

"We went back and looked over our previous work and we've added some new stuff and I think we've shown fairly conclusively that the terraces are indeed in the middle of the lake and they're where we thought they were."

Between 2011 and 2014, GNS, Woods Hole Oceanographic Institution in the United States, and the University of Waikato conducted a number of investigations at Lake Rotomahana.

Techniques they used included: high resolution bathymetry, magnetics, measurements of the water column, side-scan sonar, seismic surveys, underwater photography, and surveys of gas plumes and of the amount of heat entering the lake from geothermal systems under the lakefloor. 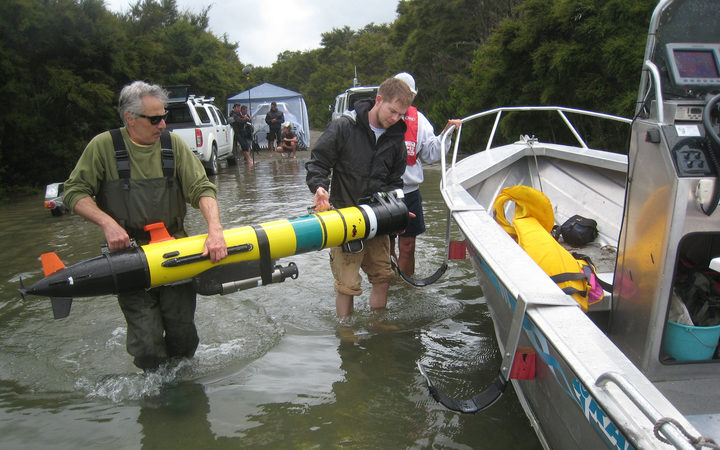 Scientists load an autonomous underwater vehicle onto the side of a support boat during a comprehensive survey of the 800-hectare Lake Rotomahana Photo: Supplied/ Julian Thomson, GNS Science

Mr de Ronde, who led the latest investigation, said it was "impossible" that the terraces might be on land.

"One of my colleagues took a photograph to replicate one that was taken in 1881 and he tried to position himself where he thought that was and when we have a look at those two photographs you clearly see the white terraces to your left, whereas the people who think they're on the land would have them on the right, so that's just impossible."

"Where we said they were previously is where we'd still say they are now."

He said people were fascinated with the terraces.

"They're so absolutely beautiful and so stunning and so unique in the history of the world. There's some modest ones in Turkey but nothing like these two."

"It's New Zealand's grand canyon and it's something special, it binds us all to the land, it's important to iwi and people are just fascinated by what happened.

"So any possibility that any part of them might have survived I think probably gives the warm fuzzies to most people."