The kiwifruit industry is facing a shortfall of 7000 workers as it predicts it will double in value in the next ten years. 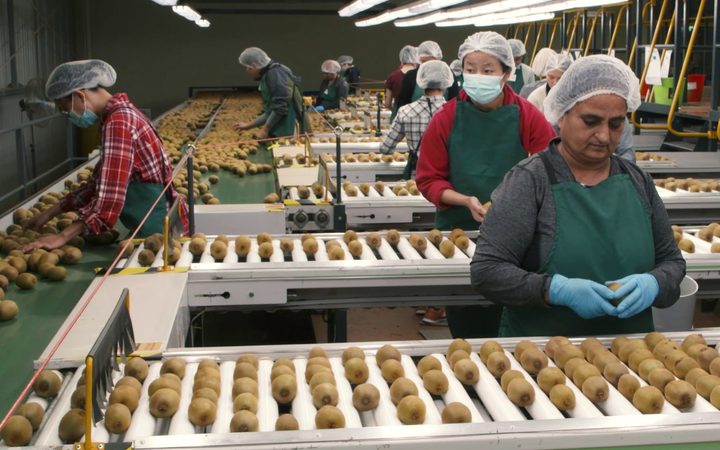 The industry body, Kiwifruit Growers Incorporated, has released a report which estimates the $2.1 billion industry will generate $4b of revenue by 2027.

Kiwifruit is already New Zealand's largest horticulture export and the report is forecasting production will jump by 54 percent, from 123 million trays to 190 million by 2027.

But it faces a problem getting there - finding the people to pick and pack the fruit.

Trevelyan's in Te Puke packs up about 10 percent of the industry's fruit each year.

Its general manager Stephen Butler said this season was difficult and on average the company was short of 20 staff per shift.

He thinks it's going to become more constrained.

"We don't see as many people arriving in our area on working holiday visas, from evidence we've been given they seem to be heading more towards the tourism industry, so there's still the same numbers of people coming in, but they're going to other industries."

Mr Butler said the company's first port of call was always for New Zealand labour, "but it's just not there."

The report found low unemployment rates and fewer people on working holiday visas choosing to work in the industry were partly responsible for the labour shortage.

A seasonal labour shortage was declared by the government in May. There were 1200 vacancies with only 30 percent of the season's kiwifruit crop picked.

The Kiwifruit Growers chief executive, Nikki Johnson, said the shortage increased the pressure on the existing workers and growers and it could not be maintained in the long-term.

She said the industry needed to get better at making the jobs more attractive to New Zealanders.

"It's certainly not something that we expect New Zealanders to come in and work in the industry for six weeks and then have to go and find another job, so we need to get better at presenting them with a more long-term proposition."

The Kiwifruit Grower's analysis showed the 2017 average picking pay rate was nearly $20.95 an hour, which it said was a notable increase on previous years.

The average hourly packhouse rate for unskilled workers was $16.13, which was just above the minimum wage when the survey was conducted last year.

Ms Johnson said perception of the pay was also problem in attracting workers.

The bulk of kiwifruit orchards and packhouses are in the Western Bay of Plenty where there is a shortage of accommodation.

According to the report, employers in the industry are looking at building or converting existing buildings to house workers, particularly seasonal workers, but the cost of consents has left some struggling.

The region's mayor, Garry Webber, said the council was working with the industry.

"The role that we can play is can we work on our resource consents, our building consents, having said that we also don't want to get to the stage where we end up with some shonky buildings which haven't got the right standards for these people that are expected to work long hours."

Mr Webber said there was no quick fix to the problem.

The Kiwfruit Growers said the industry's efforts to rekindle interest in the work such as by improving pay and worker welfare need to be complemented by government initiatives to fill vacancies.