New Zealand will get a short glimpse at the longest lunar eclipse of the century on Saturday morning. 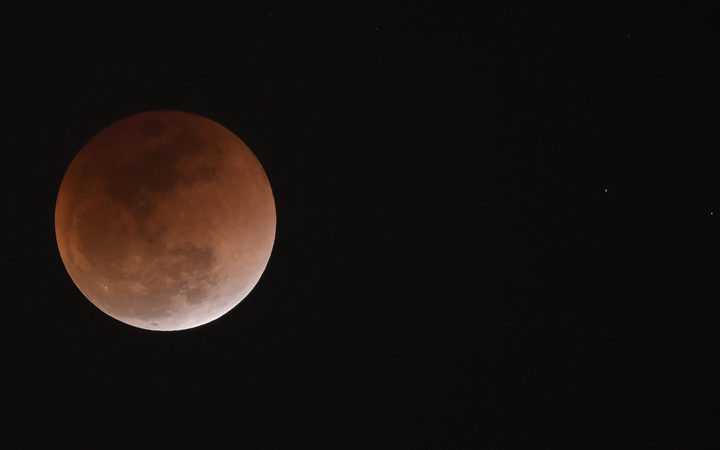 The blood moon will last for one hour and 43 minutes, just shy of the theoretical limit of a lunar eclipse which is one hour and 47 minutes.

Unfortunately, the eclipse will only be considered partial in New Zealand.

Stardome Observatory astronomy educator Josh Kirkley said New Zealanders wanting to see the blood moon should get a clear view of the western horizon and keep their eyes peeled from 6.25am until the moon sets at 7.20am.

He said the moon would begin to enter earth's shadow (known as the penumbra) around 5.15am and would gradually dim until about 6.25am.

At that point, it would enter the part of shadow known as the umbra (darkest part of the shadow) and start to turn red.

The moon appears red (rather than in complete darkness) due to blue light from the earth's atmosphere refracting sunlight onto the surface of the moon.

No glasses are needed for the lunar eclipse due to its dimmer colour.

Mr Kirkley said that the sunrise would begin during the eclipse which would "wash out" the colours of the moon as it turned red.

However, he said it was still worth seeing as the next blood moon would not be visible in New Zealand until May 2021.

The total eclipse would be visible over most of Europe, Asia, Australia, Africa and South America on Friday and Saturday. The best views are reserved for people in east Africa.

North America will almost completely miss out on the blood moon.

The blood moon in ancient culture

While lunar eclipses are treated with curiosity and wonder today, it wasn't always so.

Before we had explanations before what causes the moon to appear red, ancient cultures often feared the worst.

According to National Geographic, an Inca myth told the story of a jaguar that attacked and ate the moon (giving it its red colour).

Fearing the jaguar would come down to earth to continue its assault, people would throw spears at the moon and create noise to scare it away.

Mesopotamians regarded the blood moon as an omen that the king would be attacked.

Associate Professor of Classic and Ancient Mediterranean Studies at Pennsylvania State University, Gonzalo Rubio, said that according to Babylonian scholars, a ritual was prepared to prevent the death of the monarch.

In this ritual, the king would be substituted by a surrogate who would dress as the king and be placed on the throne while the real king would keep a low profile.

If nothing befell the king, the substitute would be put to death, "therefore fulfilling the prophetic reading of the celestial omen while saving the life of the real king".