A New Zealand mother-of-six shown in an online video being restrained on the ground at a Sydney detention centre says guards used excessive force against her. 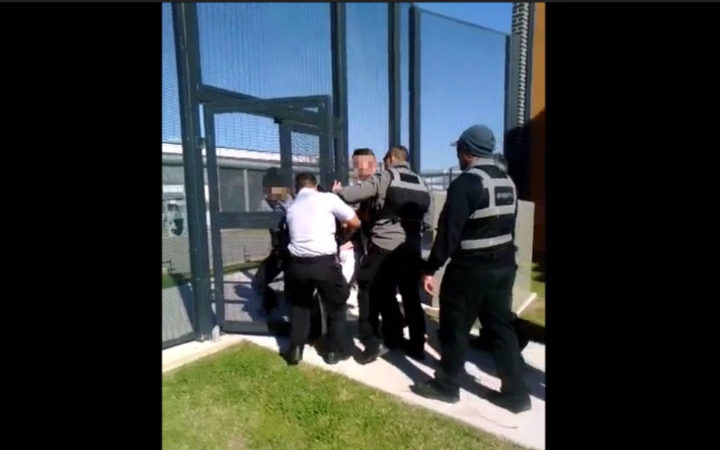 She and others say oppressive conditions being newly imposed on women in immigration detention centres in Australia are escalating tensions.

The smartphone video taken by another detainee a week ago shows nine male guards around the woman, two holding her arms, as she's led to a punishment cell in the Villawood detention centre.

"It was intimidating, you know, I was a little scared," the 39-year-old woman of Brisbane said.

RNZ has agreed to call her 'Jessie', as she feared being identified could jeopardise her appeal to get her visa back. She has been held at Villawood for 16 months.

The video shows her struggling and she ends up on the ground with at least three guards holding her.

"They tried to take me out the gate and I put my foot up on the gate, they didn't care they just dragged me out," Jessie said.

"I don't remember how I got onto the ground, but I know it was the men who did that."

Jessie said she was then cuffed, and despite agreeing to go peaceably - once out of sight of the camera - she was dragged to the cell where she was held for seven hours.

Australia's Department of Home Affairs issued a one-line statement: "All reasonable use of force, including the use of restraints, is undertaken within the law, appropriate guidelines, policy and procedures. All incidents in detention are appropriately reviewed."

The Refugee Action Coalition is calling for an inquiry, saying how the woman being manhandled showed what happened when guards could act with impunity.

A second woman detainee has predicted further trouble, due to the 40 or so women at Villawood being confined to their own compound since last week, away from male detainees.

"We don't want to be confined, we don't want to have to be around each other every single day where it causes dramas," said the 41-year-old Sydney woman, a mother of five who moved to Australia from Dargaville decades ago.

Women detainees have previously been generally reluctant to talk to RNZ and don't want their real names used.

Jessie said her run-in came after a guard blocked her from taking her lunch tray outside. She was finding the new makeshift dining area - set up in a small music room, after the orders to separate where the women and men ate ... too cramped, she said.

Shortly after, guards came into her room.

"Eight, nine of them in the house, this is a women-only house too. There was no women officers there, just the men ones."

The male guards did not allow her to use the toilet to get changed, so she had to get out of her pajama bottoms into a tracksuit in front of them, she said.

Not all the centre's guards - who are employed under a government contract with multinational Serco - were bad, but belittling treatment was common.

"All the girls were agitated and angry about being locked in. So I think that they think I was trying to cause a riot or something," Jessie said.

The Australian government earlier this year tried but failed to ban immigration detainees from having mobile phones.

The new restrictions in Villawood stop the women mixing with men, limiting or cutting off their access to education and recreation programmes, the library and shop.

It was sprung on them, the Sydney woman said.

"The treatment we're getting now is unfair. They're just a bunch of sexist pigs."

They called a brief hunger strike on Thursday.

The women and the Refugee Action Coalition dismissed the authorities' argument that the restrictions were to keep women safe, after complaints of harassment by male detainees, and as more men with serious criminal records were moved into Villawood in preparation for closing the Christmas Island detention centre, and other high-security centres later this year.

"Everyone gets along perfectly fine," said the Sydney woman, who has been at Villawood for four months.

The Department of Home Affairs did not answer RNZ's questions about the changes.

"It's a load of nonsense, I mean there's already a high-security area inside the main Villawood compound if that was necessary, but the truth is there is no necessity for women to be discriminated and isolated the way they are," Ian Rintoul of the Refugee Action Coalition said.

The real problem was demonstrated by the mishandling of the Brisbane woman, he said.

"The guards are a law unto themselves. They have that power. For misdemeanours, for what's seen as bad behaviour, you get that kind of treatment, and actually there's plenty worse.

"There's plenty of examples of people being bashed and brutalised much worse than that. You get the arbitrary searches, arbitrary instructions - I mean, that's one of the things that constantly creates tensions."

Jessie said when another detainee assaulted her, she complained to police but nothing was done.

The Sydney woman said she was manhandled by guards when she was transferred to Villawood.

The women at Villawood estimated there were 20 New Zealand citizens in their compound, and said there were probably others at transit centres in Melbourne and Brisbane.

Officially, the number of New Zealand women in detention centres at the end of May was put at 17.

Jessie said she lost her visa after twice being imprisoned, for two months each time, for breaching a domestic violence order and stealing a car.

The Sydney woman said she had no criminal record, but was detained on "character grounds" when she returned to Australia from New Zealand earlier this year.