Massey University's first woman graduate is turning a hundred today but she is showing no sign of slowing down. 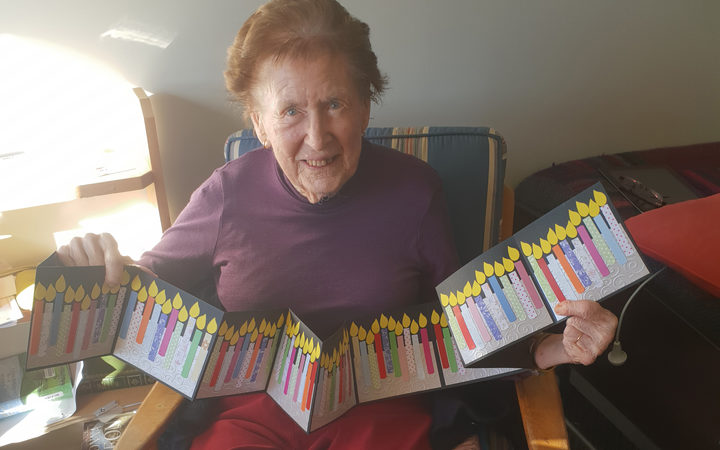 Meeting her earlier this week, Paddy Bassett was sitting comfortably in her armchair at the Rita Angus Retirement Village in Wellington and speaking to her, it became apparent her wit was still as sharp as a tack.

Her Ipad and book was close to hand, showing even approaching her centenary, she is still learning.

It's unsurprising, seeing as she was still working in connective tissue research up until her 90s.

Dr Bassett, nee Elsie Thorpe, was born in 1918 and grew up in Timaru, where her love of animals started early on.

"Two of my siblings had farms and I always interested in what was going on.

"I often spent school holidays [there], so I learnt how to milk cows, how to build a haystack and harrow a paddock."

Dr Bassett described her father as enlightened for those days and it was thanks to him that she studied at Massey University.

She later became the first female graduate from Massey's agricultural college in 1941, which not only gave her a qualification to conduct groundbreaking research, but her name.

"I'm really called Elsie, but I didn't really like it much and when I went to Massey nobody knew me, so when they asked what's my name I said 'I'm Paddy'," she said.

When asked what it was like to be one of the first women in her field at the time, she responded she was just a person like everyone else.

However, her research into connective tissue, led to our understanding of what caused the birth of stillborn lambs.

Working at a farm, she saw about 12 percent of ewes were giving birth to stillborns and once it was found they had been born injured, she decided to find out the cause.

"So I dissected a number of ewes at different stages of pregnancy."

Her research later took her to the prestigious University of Cambridge where she could study changes at a microscopic level.

She still loves animals, with her birthday party of 75 friends held at the SPCA.

"I actually really would have been a vet, but you had to go to Sydney in those days to do it, so I did the next [best] thing," she said.

Growing up in a time when most women wanted to be nurses, she said her career choice was unorthodox - as was her secret to longevity.

"I've always eaten red meat, drank full milk, eaten butter and cream and all those sorts of things. And at a later age I drank whiskey, so that's what kept me going!"