District Health Boards say hospitals are busy but coping during the nationwide nurses strike, with few problems reported so far. 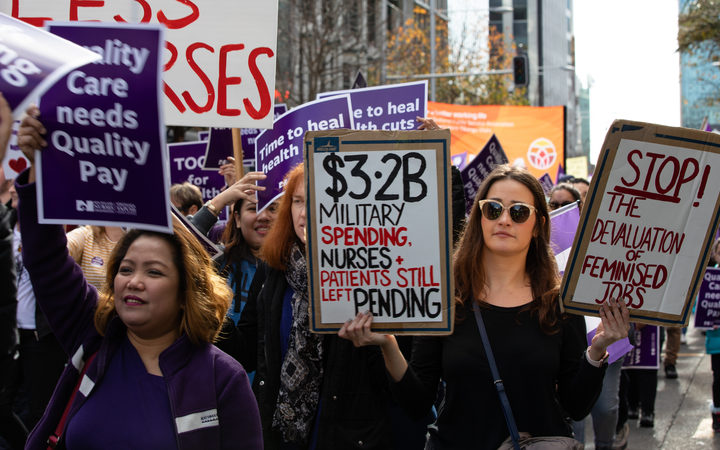 About 30,000 nurses walked off the wards at 7am this morning in a 24-hour-strike over staffing shortages and poor pay.

There have been rowdy scenes outside hospitals as nurses chanted and picketed, and Queen Street was full of hundreds of protesters during a march late this morning.

The protesters marched to Aotea square, where the crowd listened to speeches from union delegates and nurses.

Auckland City and Starship Hospitals have reported a steady stream of people coming into emergency departments.

Hawke's Bay Hospital in Hastings also had to call on an emergency agreement to get extra nurses on wards.

The DHBs have reminded peope that emergency hospital care was available for anyone who needed it.

Auckland City and Starship Hospitals are reporting a steady stream of people coming into emergency departments.

And Hawke's Bay Hospital in Hastings had to call on an emergency agreement to get extra nurses on wards.

The DHBs are reminding the peope that emergency hospital care is available for anyone who needs it.

Meanwhile the nurses union says another strike is on the cards if the Government doesn't offer any more money.

Union negotiator Cee Payne says they will take stock tomorrow, and go back to the bargaining table.

The strikes come after more than a year of failed negotiations with district health boards.

* Follow all the latest developments with RNZ's live blog here

Nurses say the $520 million package being offered by DHBs was not enough, but DHBs say there is no more money available.

Gui Restall was among the nurses on the picket line outside Auckland Hospital this morning and she said a boost in funding was vital.

"Come on Winston, there are plenty of pots out there with money for politicians' salaries for example, and their bonuses, I doubt if a politician would put up with what we put up with."

Wellington nurse Leah said a lack of staff was a major issue.

"I think there needs to be a reallocation of funds within the district health boards, I think the money's there, it just needs to be allocated better."

* Nurses' strike: What you need to know

"Long hours really, having to do overtime because there are no nurses to fill gaps and you can't leave your team isolated or stranded."

The nurses union has said another strike could be on the cards if no more money is offered up by the government.

Union negotiator Cee Payne said they would take stock tomorrow, and would go back to the bargaining table.

She said whether they strike again would be up to members.