A family of Australian tourists had an unfortunate dip in Masterton's Henley Lake when their campervan ended up in the drink. 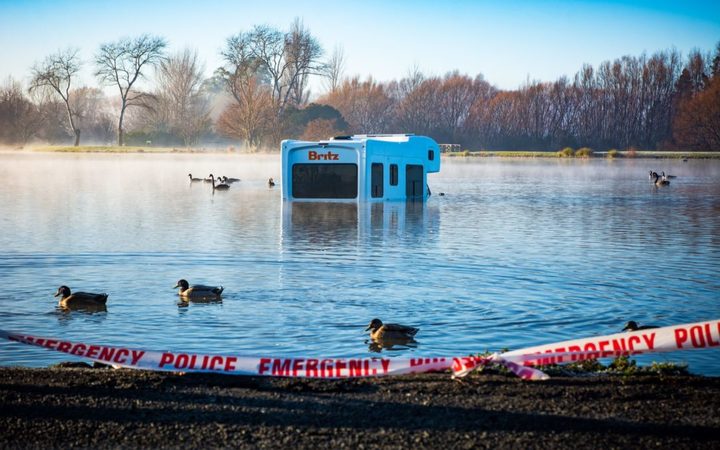 The family, parents with four children aged between 3 and 16, had arrived in the town last night.

Senior Sergeant Mike Sutton said the mother had got out to stretch her legs, and the father was probably planning to do the same.

"Except they still had [the vehicle] in gear and didn't have the brake on and it went forward into the lake with five people inside."

Members of the public looked after the mother until police, fire, and ambulance arrived.

A firefighter waded out about 20 metres to the campervan, attaching a rope.

Then a nearby waka ama was used to float the father and children to safety on the shore.

They were checked over by ambulance staff at the scene. No one was taken to hospital.

"The kids were in really good spirits," Mr Sutton said.

"They were really calm considering the circumstances."

The rescued family were taken back to Masterton Police Station to be warmed up.

They were found alternative accommodation for the night, with the campervan company to arrange retrieval of the vehicle today.

At the misty lake this morning, passers-by were capturing the unusual sight on their phones.

A woman, named Anne, was on site visiting a one-winged swan that she and a small group fed daily.

"When we came down this morning we saw the wildlife sharing the lake with a campervan - it was a bit unique."

*This article was first published in the [ [ https://times-age.co.nz/campervan-lands-in-henley-lake/ Wairarapa Times Age].