The government is under pressure to follow Britain's lead and ban gay conversion therapies. 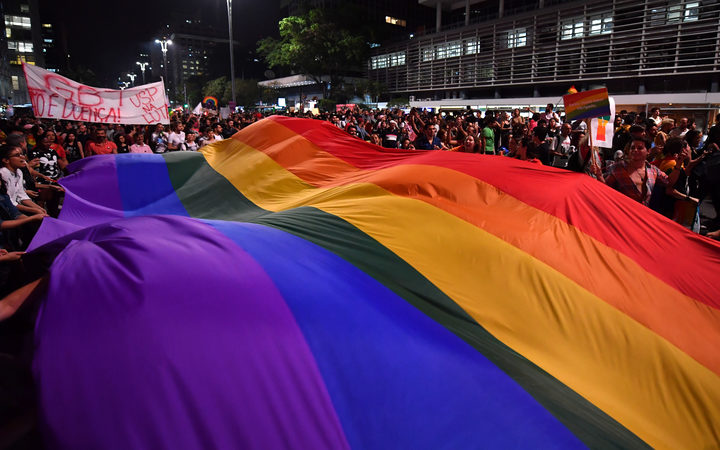 Demonstrators in Sao Paolo protesting in September last year against the decision of a Brazilian judge who approved conversion therapy. Photo: AFP or licensors

Theresa May's Conservative government has announced it wants to outlaw the controversial practice, as part of a 75-point plan to improve the lives of lesbian, gay, bisexual and trans people.

Gay conversion therapies have been outlawed in a number of other countries, but not in New Zealand.

"Surprisingly it's happening a lot in New Zealand.

"Recently someone told me that there's hundreds and hundreds of people in Auckland who have gone through a gay conversion therapy programme, so it's happening and it's really concerning."

Churches were typically involved in the conversion therapies, with pastors taking on the role of therapist, Ms Arns said.

But what the conversion therapy involved could vary.

"From my understanding, it's about helping you to change your sexuality, trying to suppress your attraction to people of the same gender," Ms Arns said.

It was something that could be particularly harmful for young people of faith who were struggling with their sexuality.

Ms Arns said the government should follow the lead of the UK and outlaw it.

"It's overdue and it's time for us to put a stop to a really outdated and harmful practice."

"My first reaction is just eye-rolling and thinking what part of the dark ages are we still in?"

Ms McGill said it can send a harmful message to young people.

"It's very dangerous when you aren't able to live your life in a congruent way, where you have to put on an act for this person and a different act for that person, and go to school and do this and at home do this.

A rainbow group in Rodney has set up a petition calling for the Government to ban gay conversion therapy. So far it has 2000 signatures.

Labour list MP Marja Lubeck has agreed to present the petition to parliament.

"There are so many people struggling with their sexuality and having these kinds of conversion therapies trying to change people from something that they know they are, does harm to these people," she said.

In a statement, the Human Rights Commission said there were no specific laws prohibiting conversion therapy in New Zealand.

It would support any moves by the government to consider ending this harmful practice, in light of Britain's decision.

While he had been advised that attempts to change someone's sexual orientation can cause them harm, the government has no intention to pursue a ban.