Immigration New Zealand has scrapped data and predictive modelling work it did to prioritise deportations.

The Privacy Commissioner and Human Rights Commission said they would work with the agency it if it developed technology or a similar initiative to the data-modelling in the future.

Documents obtained under the Official Information Act show Immigration New Zealand (INZ) set up a pilot scheme which targeted Indian students for compliance action, while the other dealt with all nationalities and visa types.

The data-modelling work was put on hold by Immigration Minister Iain Lees-Galloway after RNZ revealed its existence in April.

INZ subsequently denied that nationality was one of the criteria used to decide which overstayers it would target.

One of the released documents stated: "The data is currently being used to quantify and prioritise harm that has occurred in order to inform prioritisation of compliance activities.

"The ambition is to extend the harm model into a predictive model that can be used to predict the likelihood of long-term harm to NZ Inc based on demographics and individual harm."

Other documents showed Immigration New Zealand's Northern area compliance team used a points matrix at its weekly meeting to prioritise cases for action, using Indians as one of its criteria for deporting offenders. 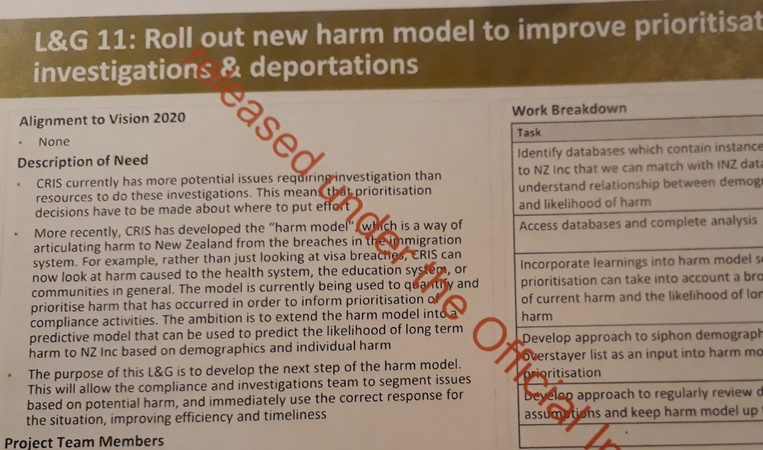 The 'harm model' spreadsheet shows how demographic details such as gender and age were included among the criteria.

Some of the spreadsheet and all of the recommendations in a report on the extended harm model were redacted.

The spreadsheet included profiles, the first of which is for people under investigation for serious offences.

The second is for "male with partnership application following Visa application decline" and the third "male student with low attendance at PTE (private training establishment). Likely to be working unlawfully".

Immigration lawyer Richard Small said the second and third criteria were an unstated euphemism for Indian overstayers, even though India accounted for only the fourth largest number of overstayers.

The inclusion of Indians as one of the two trials, and a points matrix where "Indian" was one of the criteria to prioritise cases was racial profiling by any other name, he said.

There had always been a priority list - such as deportations for serious criminals - but he said the trend was towards algorithms.

"You can have some risk indicators if they are neutral and socially acceptable - I don't think one that says Indian is acceptable. I think that's way too broad and you need to be a lot more nuanced," Mr Small said.

"If INZ want automatic selection of 'bad people' to take away common sense judgment and then not have transparency to explain how decisions were reached, you're going to have an element of suspicion and risk disconnection with certain communities." 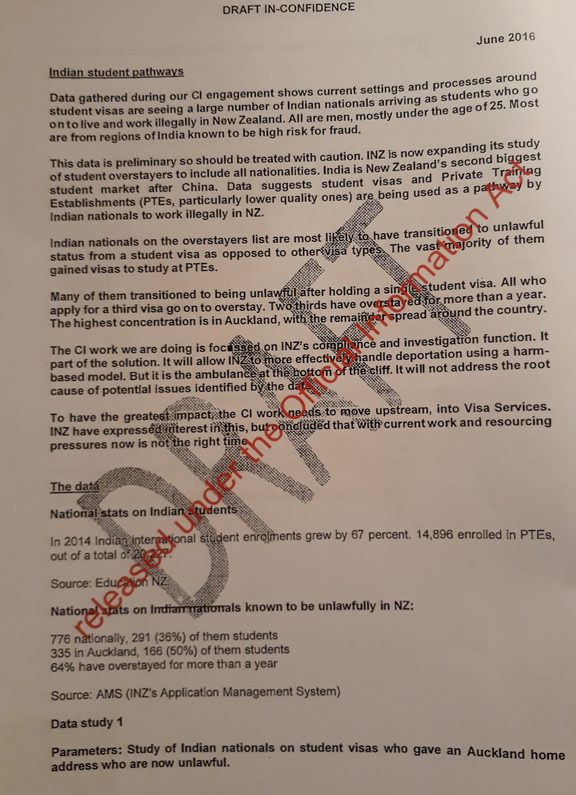 Even if it had not got to the stage of automatic profiling, there was evidence of poor and nontransparent record-keeping, without checks and balances, he said.

The documents also suggested compliance teams wanted to work more closely with visa decision makers, including those dealing with so-called Section 61 appeals, which can regularise the immigration status of an overstayer.

That raised concerns that the compliance priorities were weighing on visa decision-making, Mr Small said.

Assurances to the Privacy Commissioner that facts would be recorded in visa decisions when an exemption to the Privacy Act was brought in were not being honoured, he said.

"We've got a situation where we've got no transparency about how the facts are considered in individual cases," he said.

"Where this seems to be leading is to pre-deciding applications, pre-determination.

"Now that's not good for the immigration system. You can certainly signal risks, that's fine.

"But I think the risk is it becomes virtually a done deal, before the application even hits the desk, physical or electronic, Immigration's mind has already been made up."

In a statement, Immigration New Zealand (INZ) said a High-Harm pilot Model that focused on overstayers was implemented in July 2014 and was used to develop a spreadsheet for prioritisation in 2016.

INZ manager Peter Devoy confirmed that both the pilot programme and the Compliance prioritisation spreadsheet were no longer in use.

"The Privacy Commissioner noted that the analytical tool under discussion has not been used for 'racial profiling' nor does it appear to have been deployed in any way that would cause concern.

"Noting that terms such as "profiling" cause public concern and suspicion, both the Privacy Commissioner and the Human Rights Commission have offered to assist INZ in the development of any future technology or initiative of this type. There will be full engagement with both offices in any such future activity."

INZ said questions about whether the data models had informed decision-making processes, whether Indian immigrants were still being targeted for compliance action and if the profiles on the harm matrix were priorities for deportation would be treated as a separate Official Information Act request.

In April, INZ said it had not evaluated the total number of people deported using the pilot - but did say it was certain there had been what the department called "high priority" deportations as a result of the modelling.

"There should really be a huge outcry and rage at this," Ms Kaloti said.

"It definitely sounds like racial profiling to me. And what should be done? There should be a huge inquiry into this," she said.

"I know they do have policies and guidelines so they should stick to their guidelines, they should not be allowed to operate outside of those frameworks."