A new research project that's underway has the potential to give New Zealand's horticultural industry a bumper crop. 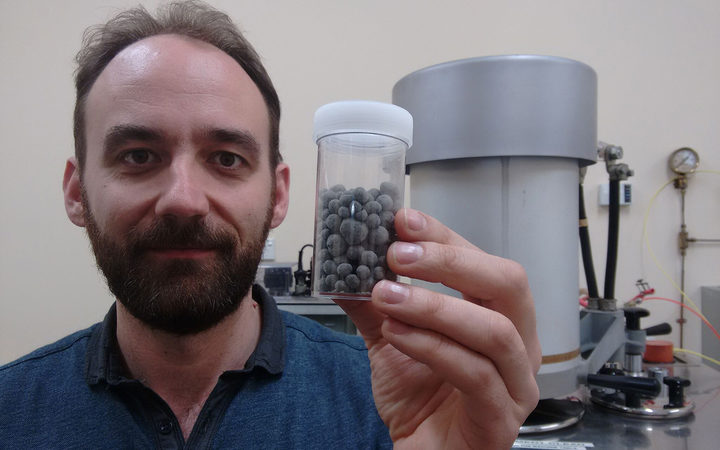 Hot Lime Labs, through Callaghan Innovation, has created a way to use wood chips and limestone to pump CO2 into greenhouses.

They say it will increase crop production and is cheaper and greener than the current alternative.

It's no secret in the horticultural industry that pumping extra CO2 into greenhouses can significantly increase crop growth.

"It's not something every grower is able to do currently, depending on the type of heating they're using and not every grower has access to the gas," she said.

Of those growers who do use clean CO2, many rely on natural gas, which isn't renewable.

Ms Barnes said there was a demand for an alternative.

"I've spoken to some of our growers and they're very keen on this idea if it can be shown to be economically viable and something they can implement," she said.

"The CO2 binds to the lime and then when we want to release it we just blow air into it, which triggers a reaction in one of the secret components of the mixture, that allows the CO2 to be released clean into the air.

Dr Vlatko Materić said there has also been interest from the forestry industry, as it adds value to a waste product.

"They are always looking for ways to make use of waste and this is a very good one, because not only can we create heat, we can extract clean CO2 for growers which has comparable value to the heat itself," he said.

Dr Materić said the technology can be applied to most greenhouse crops, and has the potential to increase yields by up to 25 percent.

However, the chief executive of forestry company IFS Growth, James Treadwell, said transporting the wood chips could be problematic, if there is now nearby forestry operation.

"We have to get machines up to chip either in the forest or we have to get the waste product to where there chipper is.

"Either way, we are transporting out a low quality wood and we can't get enough on the truck to weigh the truck out, so therefore the cost per unit goes up," he said.

Mr Treadwell said any greenhouse that used the operation would ideally need to be within about 50 kilometres of a forest to make it economically viable.

But he added any new product that could make use of a lower grade product is something the industry would be interested in.

A prototype is expected to be ready at the end of the year, when it will be tested by a capsicum grower in the North Island.