By Mark Price for the Otago Daily Times 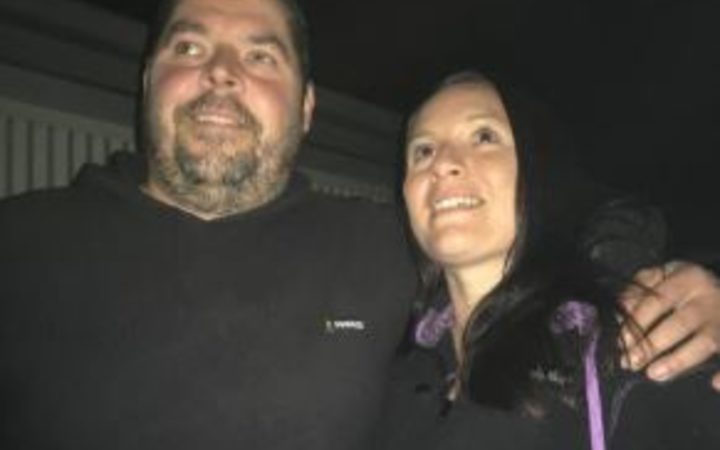 Dave Tetzlaff and partner Kirsten Mann, on the deck of their Lake Hawea home, from which they had a good view of a meteor on Monday night. Photo: Mark Price/ODT

Social media pages across the Upper Clutha lit up on Monday night with postings of an extraterrestrial object in the sky to the west of Lakes Wanaka and Hawea.

Some said it was green, others that it was blue and many who did not see it heard the boom.

First to post were Dave Tetzlaff and partner Kirsten Mann, from their Lake Hawea vantage point.

''The sky lit up brighter than a full moon,'' wrote Kirsten.

And, back came 112 responses from people spread between Haast in the north and Winton in the south.

A Wanaka woman said her house shook - ''sounded and felt like someone smashed into the garage door''.

A Makarora resident thought it was an earthquake; a Wanaka resident suspected an avalanche.

And one person watching from a hot tub ''saw a big meteorite light up the sky, very cool!''

Stefan Schwarz, of Mt Barker, said he saw ''a bright blue flash that trailed along with a tail followed by another larger blue flash''.

The ''boom'' hit about a minute later and shook his house.

''It was very impressive to witness the whole thing,'' he said.

It was spotted over Haast about the same time.

''About five or six minutes later there was a loud boom rather like distant thunder, which was strange as the sky was clear,'' Okuru farmer Kerry Eggeling said.

Mr Eggeling rang around the district and found one other person who also saw it, and several who heard the boom.

It was also logged on the meteorite section of the WeatherWatch website: ''Just saw two bright blue flashes in the sky with a small tail, followed a minute later by a sonic boom that shook the house, it was heading over Mount Roy near Wanaka,'' an eyewitness wrote.

One wag linked the boom with a New Zealand Herald article about New Zealand's half-trillion-dollar ''debt bomb'', and, not to be outdone, another said he heard two booms.

Tekapo meteorite authority Alan Gilmore did not witness the event, but from the description provided suggested it was probably a meteor of a size larger than a basketball.

''The boom implies that it came quite low. An object has to come down below about 60km for sound to reach the ground.''

Mr Gilmore said a meteor that made a noise occurred, on average, less than once a year in New Zealand.

''It's several years since I have heard reports of one that actually had a sound that reached the ground.''

He thought the chance of the meteor hitting the ground was ''very low''.

This article was first published in the Otago Daily Times.