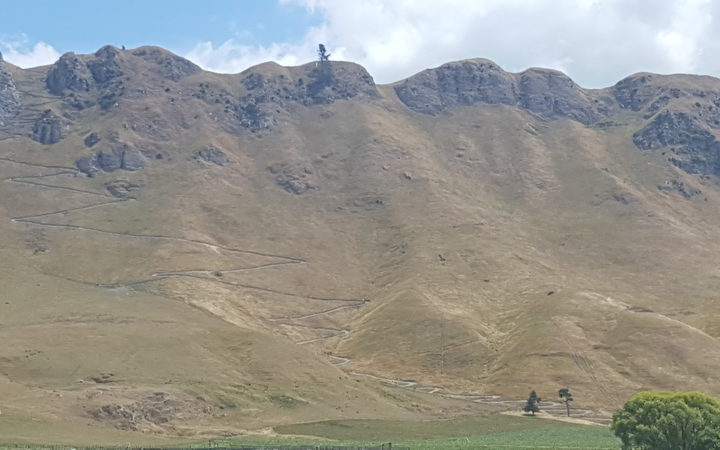 The existing zig-zag track up Te Mata Peak has been the subject of furious debate Photo: RNZ / Supplied

Ngāti Kahungunu and Craggy Range Winery announced yesterday they would close the existing, controversial track, and build a new one that will protect areas of cultural significance.

But while that seemed to bring a near six-month long stoush over the track created by the winery to an end, it's left many people stunned and angry.

Ngāti Kahungunu tried to assure those present at the hui that the new plan it had unveiled with Craggy Range would benefit everyone.

But representatives of Waimarama Marae blasted Ngāti Kahungunu's chairman Ngahiwi Tomoana for signing off on the deal without speaking to them first.

It follows months of protests after the winery carved the track up the eastern slope of Te Mata Peak, without consulting Māori, on land believed to be the figure of an ancestral chief.

Florence Karaitiana attended the hui, but said it had come far too late.

"Ngahiwi gave his report, which is miles too late, it should have been done before he made the decision in my view," she said.

"But we didn't ask him to go and create another one and we certainly didn't get him to make a decision on anything."

Ngāti Kahungunu and Craggy Range will purchase 28 hectares of land between them which will be used to create a new track.

Ngāti Kahungunu said in a statement wāhi tapu or sacred areas will be protected, and it will allow mana whenua to be the guardians of their own land.

But Waimarama kaumatua Robert Macdonald said all hapū should have been consulted before that agreement was reached.

"Why wasn't anybody consulted before the decision was made? There was no consultation with any group," Mr Macdonald said.

"It was just a decision made by one person basically."

Toni Wairama, who wanted to remove the existing track, said all that effort had fallen flat.

"What a total utter waste of time. The whole kawa of the way they did this was deceitful and I don't think the Craggy Winery people truly understand our mamae."

Local Christine Kidwell said it had been a long and tiring fight to get Te Mata Peak back to its original state.

The mountain is more than just a landmark to her whānau and hapū, it is the body of their ancestor, Rongokako, she said.

It had been heartbreaking to see it disfigured and handled the way that it had.

"That's a significant site in itself. It's actually been massacred in our eyes," Ms Kidwell said.

"I'm 70-plus, I've got older sisters and brothers older than me. For our family I believe it has taken away that feeling of our story in regards to how Rongokako was shaped up there."

Ms Kidwell hoped hapū would be at the table when plans for the new track were developed.