MediaWorks has removed episodes of the Roseanne sitcom from its on-demand service and won't be airing any more episodes on NZ television, following its cancellation in the US. 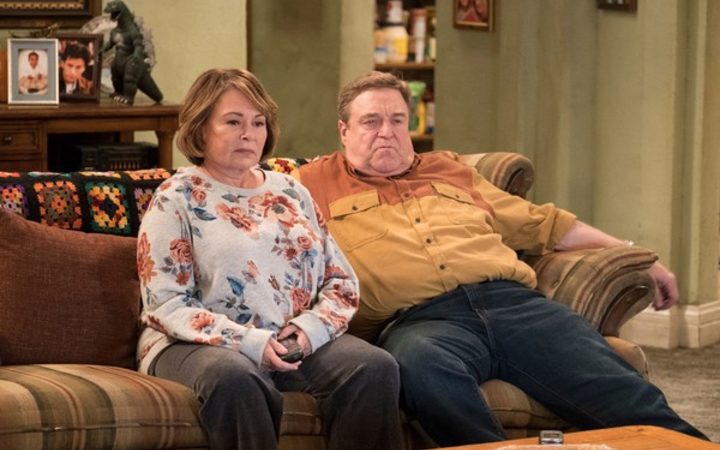 Roseanne Barr and John Goodman in the 2018 revival of 'Roseanne'. Photo: ABC

The revival of the successful show came to an abrupt end today over a racist tweet from star Roseanne Barr.

The American television network ABC described the star's tweet as abhorrent, repugnant and inconsistent with its values.

Ms Barr has also been dropped from her talent agency.

The current season of the show finished airing in New Zealand on Three last week and MediaWorks has removed episodes from its ThreeNow service.

It said it fully supported Disney and ABC in the decision to cancel the series.

Barr's tweet said Valerie Jarrett - an African-American former Obama aide - was the child of the Muslim Brotherhood and the Planet of the Apes film.

The reboot of her hit '90s sitcom had been a ratings hit.

The comedian deleted Monday night's original post and apologised, but could not contain the backlash.

Hollywood talent agency ICM said in a statement on Tuesday it will no longer represent Barr.

The fallout from the show's cancellation also hit its lucrative syndication market as Viacom said it would pull reruns of the 1990s Roseanne episodes from its cable networks. Another cable network, Laff, also said it was removing reruns of the show.

Hulu said the new Roseanne show would no longer be available on its streaming service.

The original Roseanne ran from 1988 to 1997, featuring a blue-collar family, the Conners, with overweight parents struggling to get by. It was praised for its realistic portrayal of working-class life.

The current Roseanne was ABC's biggest hit of the 2017-2018 season, drawing an average 18.7 million viewers, second only to CBS sitcom The Big Bang Theory.

ABC aired nine episodes of Roseanne from March until May and generated $US22.8 million in ad revenue, or 2.5 percent of the network's total for the season, according to iSpot data. In late March, the network renewed the show for another season.

White House spokeswoman Sarah Sanders, asked whether Trump thought the show should have been cancelled, told reporters travelling with the president to Nashville, Tennessee: "That's not what the president is looking at. That's not what he's spending his time on. I think we have a lot bigger things going on in the country right now."

Emma Kenney, who plays Gilbert's on-screen daughter Harris, said she had decided to leave the series because of Barr's words even before ABC cancelled the show. "As I called my manager to quit working on Roseanne, I found out the show got cancelled," Kenney wrote on Twitter.