The country's biggest salmon-farming company is asking for more than $100,000 of taxpayer money to help figure out how to deal with thousands of tonnes of dead fish and fish faeces. 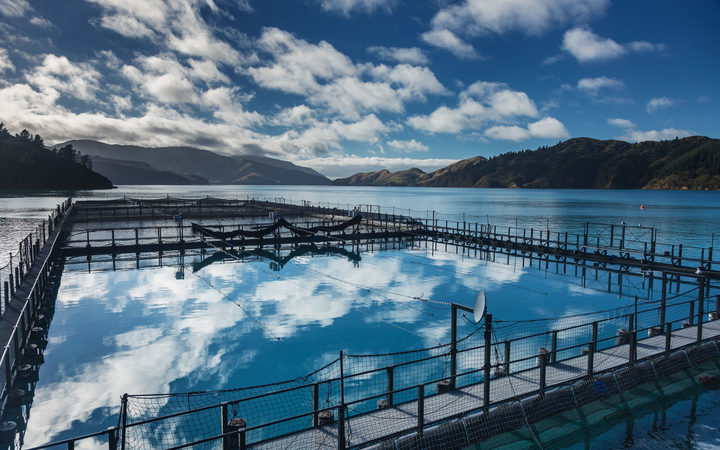 A NZ King Salmon farm in the Tory Channel. Photo: Supplied to RNZ

In a document dated this month, obtained by RNZ, New Zealand King Salmon identified 1000 tonnes of "mortalities" - fish that have died in captivity or during transfer - go to the Bluegums landfill each year.

"Mortalities are collected daily and transferred via road from Picton and Havelock through to the landfill in Blenheim."

It said warm water temperatures in the Marlborough Sounds was the main reason for the deaths but to continue dumping them was wasteful.

"[It's] not an appropriate solution due to environmental impacts (emissions), loss of potential valuable resource and cost."

The document stated 2000 tonnes of fish faeces, which it was working to have removed from the seabed floor of the Marlborough Sounds, would also have to go to landfill.

However, the submission said, this option was not going to be sustainable.

"Due to the odour of this product, transportation and acceptance at landfill would likely become an issue."

It also said if King Salmon got "locked out" of the landfill, it would have no other option and the risk to the company would be "significant".

"Due to the high volume of waste generated there is a risk that the volumes will be too high for current landfill sites."

"With current disposal options limited to landfill, there is significant risk to the company."

The document was a draft submission to the Ministry for the Environment, asking for $116,000 from the Waste Minimisation Fund. The company will put in around $175,000 of its own money.

King Salmon said it wanted to research composting the waste and run a trial.

With the samples from the trial it would then undertake market research to see whether anyone might want to buy it.

It estimated the total cost of the trial would be close to $300,000, with just over a third of this coming from the government.

King Salmon chief executive Grant Rosewarne told Morning Report they could get by without the funding but that the funding would help them achieve a greener environment for New Zealand sooner.

"We'd like to turn them [the dead fish] into a compost … brand it and sell it to consumers as a positive green product," he said.

Mr Rosewarne said they were a wealthy company and would have turned their attention to it eventually, but that applying for $116,000 of the government's $10m Waste Minimisation Fund would help them achieve that faster.

"It is an important initiative, the government wants it done sooner and so we are prepared to do that with these additional funds assisting."

"The new government has been very clear that it wants Kiwi companies to become even greener and cleaner, which is why we are trying to work with them to more quickly fulfil these ambitions," a King Salmon spokesperson said.

"We could work on this by ourselves, but not at the pace that it is clear New Zealanders expect. The Waste Minimisation Fund helps us move more quickly.

"We are also working positively with the new government to progress a plan to relocate our farms to cooler, deeper waters. This will help reduce fish mortality, create more green jobs, and allows us to grow our business so we can afford to invest in more sustainable tools like waste-capture technology."

In the past five years NZ King Salmon declared it had received $500,000 from the Ministry for Primary Industries, $2.4 million from Seafood Innovation - of which the Ministry of Business Innovation and Employment is a "cornerstone investor" and $15,000 from MBIE for pet food research.

For the 2017 financial year NZ King Salmon harvested just more than 7000 tonnes of salmon and had consent to farm 17 hectares in the Sounds.