A panel of experts has issued advice saying there's no evidence the chemicals in firefighting foam affect people's health, but there is not enough evidence to rule it out either. 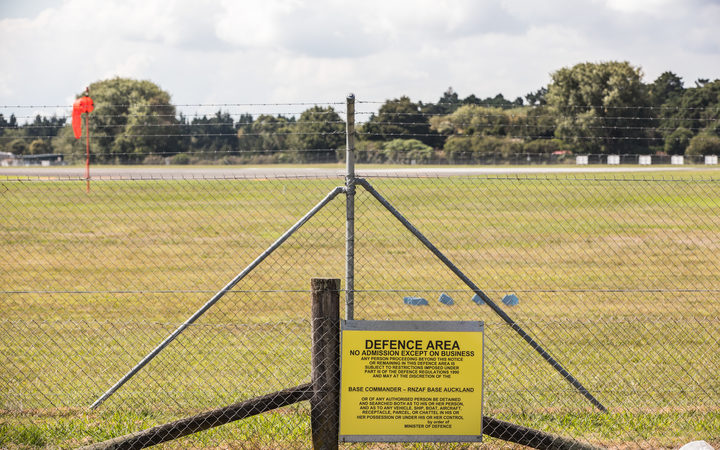 Defence bases, like at Whenuapai, have been investigating contamination by the chemicals. The firefighting foams had been in use there for fighting fuel fires and, more often, training to do so. Photo: RNZ / Cole Eastham-Farrelly

The panel was set up by the Australian government, but New Zealand had been waiting for the updated advice to help with its response to foam contamination.

A nationwide investigation is being carried out at defence bases, airports and factories.

The panel reviewed 20 recent Australian and international reports into the PFAS - of per- and poly-fluoroalkyl substances - class of chemicals.

"The Panel concluded there is mostly limited or no evidence for any link with human disease," its newly released report said.

"Importantly, there is no current evidence that supports a large impact on a person's health as a result of high levels of PFAS exposure. However ... important health effects for individuals exposed to PFAS cannot be ruled out based on the current evidence."

It said a reported link to testicular and kidney cancer could be down to chance.

The chemicals are extremely longlasting and build up in the body. Two types of them, PFOS and PFOA, have been banned in New Zealand, but most fire crews still use foams with PFAS of some kind in them.

The expert said its advice to the Australian Government was that no specific health intervention was needed except for research purposes.

A New Zealand Cabinet paper in February said officials were "liaising with their Australian counterparts to ensure this [updated health advice] informs the New Zealand response".

Critics of the health advice on both sides of the Tasman, including veteran US public health official, have repeatedly said it was too soft and underplayed the risks.

The Australian panel said its review found fairly consistent reports of health effects from exposure to PFAS, which were:

Even for people with the highest PFAS exposure, these effects were not much different from the general population, it said.

The advice will be used in Australia's $13 million national research programme into PFAS and health.

The United States has stronger health advice than the Australian panel's.

"There is evidence that exposure to PFAS can lead to adverse health outcomes in humans," the US Environmental Protection Agency advises on its website.

"Studies indicate that PFOA and PFOS can cause reproductive and developmental, liver and kidney, and immunological effects in laboratory animals.

"Both chemicals have caused tumors in animal studies. The most consistent findings from human epidemiology studies are increased cholesterol levels among exposed populations, with more limited findings related to infant birth weights, effects on the immune system, cancer (for PFOA), and thyroid hormone disruption (for PFOS)."

It highlighted what it said were "multiple limitations and issues" with research findings into the health impacts of PFAS including studies where cause and effect could not be substantiated, a small number of studies on some health effects,and statistical analysis problems.