A Canterbury farmer has laid waste to a threatened native shrub, knocking out a third of its national population in one fell swoop. 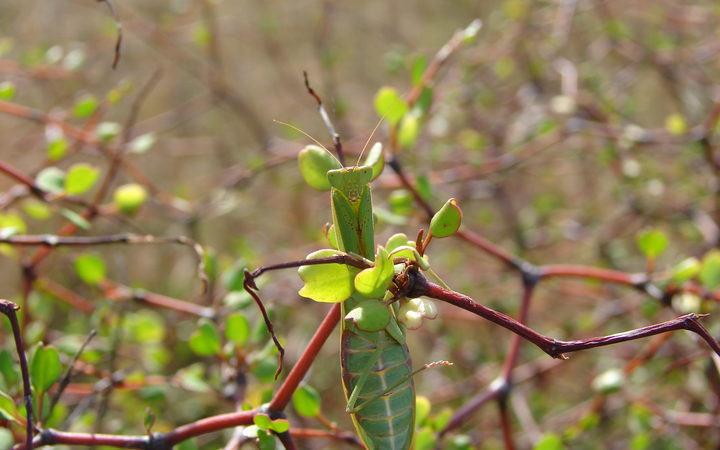 Praying Mantis are found in the shrub. Photo: RNZ / Supplied

Once abundant along the East Coast, shrubby tororaro is now down to 3700 plants, most of those on private farmland on Kaitorete Spit near Banks Peninsula.

Forest and Bird's Jen Miller said farmer Brent Thomas sprayed the shrubs with a herbicide before the land was sown with oats for winter feed.

"And so we've sought an enforcement order which is effectively seeking that the owner does no more work and attempts some rehabilitation of the site... our advice is it's possible but will take many decades."

Ms Miller said the damage was done within a month of Mr Thomas buying the farm earlier this year.

"It's hugely disappointing this has never been purchased by perhaps the department of Conservation or Environment Canterbury... it's too special, it's too wonderful and important nationally for this kind of thing to happen to it."

It was a slow growing hardy plant that had managed to survive for thousands of years but had been pushed to the edge by intensive farming on the Canterbury Plains, she said.

"[It's] tragic really, especially given the significance of this population and the state it's in and you know you sort of think, well how was this allowed to happen, surely this was a population that should have been an absolute priority for protection on private land."

Department of Conservation manager Andy Thompson said an attempt was made to purchase the land when it went on the market in February, but it had already been sold. 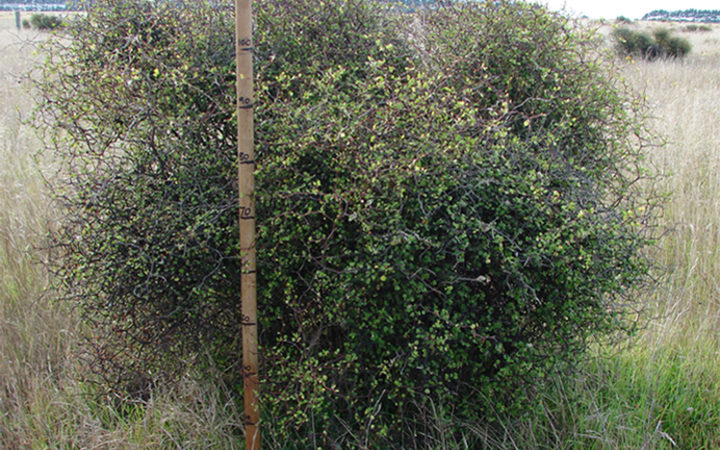 When they spoke to the new owner in March, just a few weeks later, 1000 of the shrubs had already been destroyed, he said.

Mr Thompson accepted assurances from the farmer that he did not realise how rare and important the shrubs were.

"I was sitting beside him when we showed him the maps of where the plants were and if I hadn't seen his jaw drop myself I would probably be sceptical of that reaction but I have to say he's been quite genuine in his concern for the plants and also about what we're trying to achieve in the future."

DOC was now trying to buy 109 hectares from the farmer to be turned in to a reserve, protecting 1500 of the shrubs.

But Mr Thompson said it would not be possible to replant the 1000 shrubs that Mr Thomas had removed, as the land had been sprayed and it did not do well when it was transplanted from one area to another.

Forest and Bird wanted to know if Mr Thomas intended to remove the 900 shrubs on the land he would continue to own once the DOC sale went through.

Mr Thomas responded to RNZ's questions through a public relations consultant, who said due to poor cellphone reception Mr Thomas was not able to give an interview.

In a statement Mr Thomas said he was horrified to find himself in this situation and was continuing to work towards reaching a collaborative long-term solution.